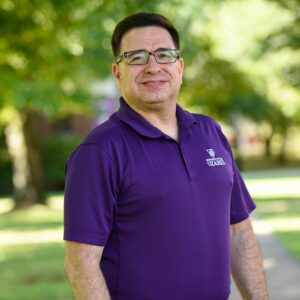 Dr. Taylor was born in Fayetteville, AR and is a graduate of Farmington High School.  He received an Associate of Applied Science in Electronics Systems Technology degree in 1995 and Bachelor of Applied Science in Biblical Studies from Bethany Bible College in 1998 while serving in the United States Air Force.  Two years later he received a B.A. in Mathematics from Thomas A. Edison State University in preparation to teach secondary mathematics in Richardson, TX. Taylor later worked as a technical writer and curriculum developer for the Air Force before serving as head of the mathematics department at Canyon Creek Christian Academy in Richardson, TX. Taylor moved back to Arkansas in the Summer of 2004 to pursue teaching opportunities in the River Valley, and later completed an M.A. in Teaching from the University of Arkansas at Monticello in 2006. He was later hired at Pottsville high school as a secondary math teacher and then served as a state mathematics specialist first at Arkansas Tech University, and then at the Guy Fenter Education Service Cooperative in Branch, AR. In 2018 Taylor was awarded a Ph.D. in Christian Education from Bethany Seminary and serves as an instructor of Education/Mathematics Education at the University of the Ozarks in Clarksville, AR.

Current projects include working with colleagues in the mathematics department on a numeric structures approach to the (3n + 1) problem and developing and validating a construct map of algebraic thinking, and modeling the variation among convex quadrilaterals.