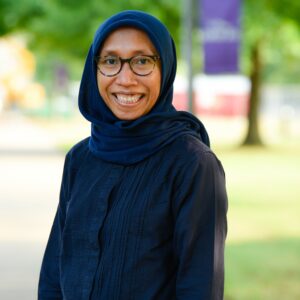 She obtained extensive training in the area of nanoscale allotrope of carbon  (nano-engineered fullerene colloidal suspensions), where one of her works was selected as the cover article for the Journal of Environmental Science and Technology (ACS publication) for July 2012 edition. She co-edited a book titled Arachidonic Acid: Dietary Sources and General Functions, and is one of the editors for Modern Chemistry and Applications. Her research interest spans from nanomaterials to environmental sciences, focusing on the synthesis and characterization of fullerene nanomaterial and its toxicity/oxidative mechanism in the environmental systems. More recently, she works with chemistry major students on graphene as nanomaterial for environmental applications.

Since 2016, she has been involved in coaching chemistry and material science to Arkansas high school students for the Arkansas Science Olympiad. She is also serving as the faculty advisor for interfaith working group at the University of the Ozarks, to promote understanding among various worldviews. In her spare time when she is not performing an experiment in the lab, she loves to perform cooking experiments in the kitchen. To her, chemistry is like cooking (just don’t lick the spoon!).