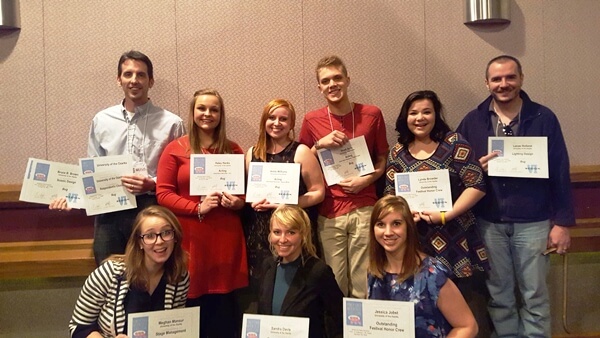 The University Theatre presented its production of “True West” by Sam hepard at the annual state festival. By winning the festival’s top two honors, Ozarks is now eligible for selection for the regional festival, scheduled for the spring of 2017.

“It was so exciting for us to win the top two awards at the festival once again,” said Bruce B. Brown, Walton Professor of Theatre, “This is the fourth consecutive time we have been chosen as the Directors’ Choice of the festival. That award alone shows just how much our theatre colleagues within the state recognize the great work we are doing in our program. Last year’s production of ‘BUG’ won the Directors’ Choice and Respondent’s Choice award and was later selected for the Region VI festival. With the success we had last year, we all felt some pressure to do well this year, and bringing home such distinguished accolades was extremely rewarding.”

Students James Allen and Daniel Hall each won both an Excellence in Honor Crew and Pride of the Honor Crew awards.

In December, six university theatre companies from Region VI (Arkansas, Oklahoma, New Mexico, Louisiana, and Texas) will be chosen to have a production featured at the 2017 regional festival in San Angelo, Texas, March 1-4.

“Our students work incredibly hard and continuously grow as theatre professionals with each new production we mount,” Brown said. “Their dedication and passion for creating theatre is what always leads to these wonderful achievements. I am so proud of this company and the outstanding leadership they displayed during the process and especially while at festival.”