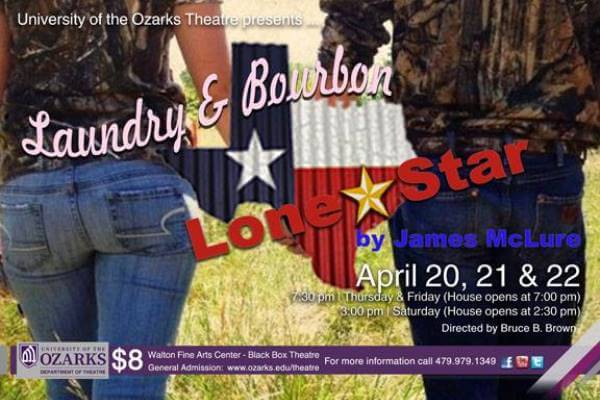 The performances will be held in the Black Box Theatre in the Walton Fine Arts Center starting at 7:30 p.m. on April 20 and 21 and at 3 p.m. on April 22. General admission tickets are $8 and can be purchased at the box office prior to the play or at www.ozarks.edu/theatre. Seating is limited.

The play contains adult language and situations and is intended for mature audiences.

McLure’s “Laundry & Bourbon” and “Lone Star,” are two separate plays, but function as a complete work in the University Theatre’s production. The comedies explore the lives of six deceptively simple, salt-of-the-earth folk in the small town of Maynard, Texas. There are women who only want to talk about men, and men who only want to talk about women. There are discussions about Let’s Make a Deal and the Vietnam War, but the heart of the story is about male/female dynamics.  Both acts hinge on recurring themes of discontent, fondly remembered glory days, and tacit acceptance of the limitations of life.