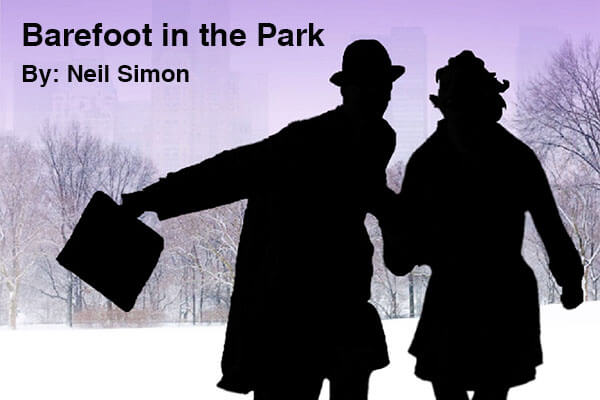 University of the Ozarks Theatre will present three showings of Neil Simon’s iconic play, “Barefoot in the Park,” on March 8, 9 and 10.

The romantic comedy will be shown at 7:30 p.m. on March 8 and 9 and at 2 p.m. on March 10, in the Black Box Theatre in the Walton Fine Arts Center. Tickets are $8 each and can be purchased online at Ozarks.edu/theatre or at the box office one hour prior to the showtime.

Premiering in 1963 on Broadway, “Barefoot in the Park” tells the story of a newlywed couple, Corie and Paul Bratter. For their first home, they live in an apartment on the top floor of a brownstone in New York City. Corie is optimistic about their future together, while Paul, the more anxious and grounded half of the couple, worries about the various flaws in the apartment, such as a hole in the skylight, their leaky closet, and the lack of a bathtub.

Shortly after moving in, Corrie attempts to set her mother up with their eccentric neighbor Mr. Velasco. During the course of four days, the couple learns to live together while facing the usual daily ups-and-downs. Corrie wants Paul to become more easy-going: for example, to run “barefoot in the park.”

The play was nominated for three 1964 Tony Awards and was turned into a film in 1967 starring Robert Redford and jane Fonda.