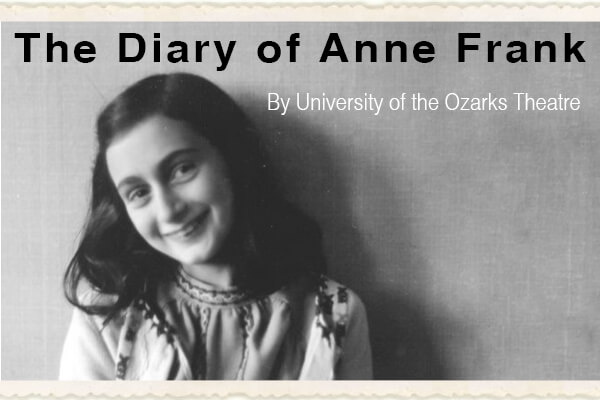 University of the Ozarks Theatre will open its 2018-19 season with several performances of the powerful adaptation of “The Diary of Anne Frank,” scheduled for Nov. 2-6 in the Walton Fine Arts Center.

Tickets are $8 for adults and $5 for seniors and students and can be purchased at Ozarks.edu/theatre or at the box office on the evening of the production.

“The Diary of Anne Frank” is a 1997 adaptation by Wendy Kesselman of the original stage play written by Frances Goodrich and Albert Hackett. It is based on the book, “Anne Frank: The Diary of a Young Girl.”

In the new adaptation, Frank emerges from history a living, lyrical, intensely gifted young girl, who confronts her rapidly changing life and the increasing horror of her time with astonishing honesty, wit, and determination. An impassioned drama about the lives of eight people hiding from the Nazis in a concealed storage attic, “The Diary of Anne Frank” captures the claustrophobic realities of their daily existence — their fear, their hope, their laughter, their grief. Each day of these two dark years, Frank’s voice shines through: “When I write I shake off all my cares. But I want to achieve more than that. I want to be useful and bring enjoyment to all people, even those I’ve never met. I want to go on living even after my death!” This is a powerful new adaptation for a new generation.

The New York Times called the play, “Undeniably moving. It shatters the heart. The evening never lets us forget the inhuman darkness waiting to claim its incandescently human heroine.”  The New York Post said it was “an extraordinary theatrical adventure! Go and remember.” The Associated Press called it “a powerful new version that moves the audience to gasp, then tears.”