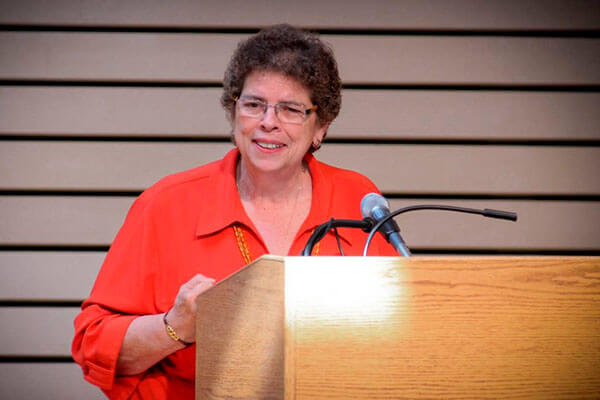 The Rev. Dr. Eileen W. Lindner, a long-time national advocate for children, will speak at University of the Ozarks on Monday, Feb. 10, as part of the Cecil and Ruth Boddie Farmer Chapel Guest Speakers Series.

Lindner’s talk is titled, “Is Childhood an Endangered Species?” and will begin at 7 p.m. in the Rogers Conference Center. The event is free and the public is invited to attend.

The Presbyterian pastor has worked on behalf of children for most of her professional life. She served as the director of the Child Advocacy Office for the National Council of Churches of Christ in the 1970s and was appointed by President Jimmy Carter as U.S. Commissioner for the International Year of the Child where she worked closely with the White House on child welfare policy during the Carter administration. In 2006, she wrote the book, “Thus Far on the Way: Toward a Theology of Child Advocacy.”

In her talk on the U of O campus, she will discuss how we can help ensure the wellbeing of children in today’s society.

“Today throughout the world children are subject to economic exploitation, trafficked for purposes of sexual abuse or as child soldiers and are subjected to rates of poverty and neglect that are unprecedented,” Lindner said. “Even in affluent countries, children today are often oversubscribed to tutoring, sports, drama, music and martial arts training leaving little time or opportunity for the essential developmental task of being children. As we increase our awareness and concern for the natural environment we might do well to consider the circumstances of the youngest cohort of humans and reconsider our priorities. Poet John Donne long ago lamented the plight of children who are “…weeping in the playtime of others.”  We will look together at the plight of children asking ourselves how we can best enable today’s children to live the lives for which they were created.”

Lindner, who earned her Ph.D. in church history from Union Theological Seminary, was ordained in the Philadelphia Presbytery in 1975. She has served in churches throughout the country, most recently as senior pastor at Presbyterian Church at Tenafly in New Jersey from 2009 to 2018. She currently serves as a consultant for the Presbyterian Foundation and Presbyterian Mission Agency.

Lindner served as the Deputy General Secretary for the National Council of Churches from 1986-2007. She also served as the Executive Presbyter of the Presbytery of the Palisades from 2007-2009.