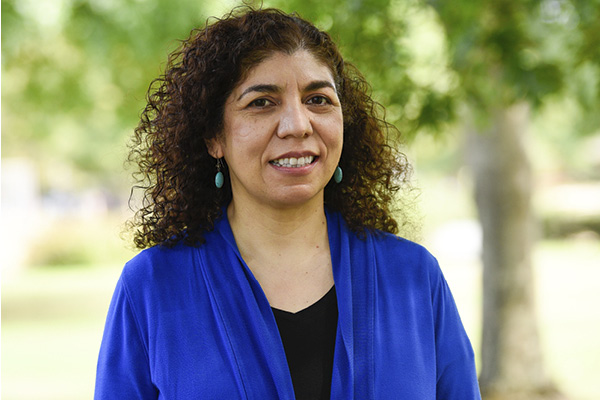 A new academic book authored by Dr. Argelia Garcia Saldivar, assistant professor of Spanish at University of the Ozarks, reviews the impact of capitalist values and the capacity of the transatlantic press to promote emancipated models in Hispanic societies at the beginning of the 20th century.

The book, Conexiones transatlánticas: Expandiendo límites en el mundo Hispano 1890-1910 (Transatlantic Sisterhood: Expanding Limits in the Hispanic World, 1890– 1910), is based on Saldivar’s dissertation that she completed at Purdue University in 2016.  Editorial Pliegos published this book at the end of 2021 in Spain.

Saldivar said her book primarily targets the academic community studying the gender construction in the Hispanic literature of 19th century but that it also contributes to transatlantic studies by analyzing the press communities and writers networks promoting commercial and cultural exchange between Europe and the Americas before the First World War.

She called it a privilege to publish her first book.

“Now, I am more confident to express my own reflections and have developed a good intuition to select materials,” she said. “Working on the technical aspects helped me to grow up as an author by accepting direct criticism. Now I pay attention to every detail to improve my writing techniques. After all the research involved in this book, I feel very special for having access to professional education and better job opportunities than the past generations had.”

In the book, Saldivar said she analyzed the “discursive strategies used by women at the beginning of the 20th century, to include their voices as part of modern criticism, changing public perceptions about the construction of gender in Hispanic societies.”

“This book shows how the periodical press produced by women for women legitimized discourses that called for equal education for men and women,” she said. “The material analyzed includes news, short stories, dramas, novels, travel literature, conference proceedings, and past and current criticism that evaluates women’s discourses. I focus on the commercial press sending messages to empower women through consumption habits, and interest in different countries and cultures connecting international audiences creating solid networks. The most common discursive practices at the turn of the century used literary representations as the instrument to rise attention to woman condition. Consequently, I included the reaction of the public to women productions, especially the responses generated by the critics of that time to remarkable women authors … I reflect on the impact of commercial press targeting female audiences. We can observe how the consumption habits promoted emancipatory models. For example, fashion magazines invited women to learn about art and science, and to use modern technology to enjoy life in public events, to travel, to practice sports, to play with fashion and impress the public. The fashion magazines also defined the concept of ‘the new woman,’ helping to expand the domestic spaces traditionally designated for women. Consequently, the ‘new’ woman needed an income to sustain the modern lifestyle.”

Saldivar said the historical moment at the turn of a century “woke up curiosity about the future and interest for cultures abroad, expanding the limits of time and space.”

“International news circulated as translations in many European, USA, and the Americas, creating important transatlantic networks that influenced the way of living in both continents,” she said. “There are contexts when women used social activism as a discourse to reinforce their rights, the public demonstration of the intellectual capacity and leadership of women was important for the suffragist movements, then, the circulation news showing contributions of the international women strongly sustained the fight for women’s rights. For example, the contributions of Madame Curie on chemistry and physics, the new educational system designed by Maria Montessori, the research on social welfare and sustainability developed by Dr. Cecilia Grierson, or the prison reforms implemented by Concepción Arenal in Spain resonate throughout the world.”

Saldivar said that as a conclusion, “I can say that even though liberal governments were friendlier to the advancement of women in terms of education and labor opportunities, there exists some limitations that each generation needs to overcome.”

“In a very personal interpretation of women’s struggle for gender equality, I shared the myth of Sisyphus presented by Albert Camus and an analogy to understand the continuous fight for women’s rights,” she said. “The French writer popularized a tragedy showing a hero doing useless work. Sisyphus must carry a rock on his shoulders to the top of the mountain. After surpassing all kinds of obstacles, he must drop his rock and begin this task every day. For many critics, this is an example of the existential problem of living a life without purpose. However, fighting for women’s rights is not a worthless aspiration; each victory improves the lives of women of the next generation. Each time we fight, we learn valuable lessons that transform society.”

Saldivar said she grew up enjoying the idealized representation of woman presented by sentimental novels and romantic poetry.

“Later, as a graduate student in the Spanish literature program at Purdue University, I learned to analyze female characters with different perspectives,” she said. “My main inspiration to write this book came from my advisor and mentor, Dr. Iñigo Sánchez-Llama. His research about Elizabethan Writers Gallery opened a door to investigate professional writers of the 19th century. Latter, working on my dissertation, I developed a great interest in transatlantic connections created by newspapers circulating in Spain, Peru and Argentina, and translated for European and American audiences.”

Saldivar, who joined the Ozark faculty in 2019, earned her Ph.D. and master’s degree, both in Spanish literature, from Purdue University. She has a bachelor’s degree in computer engineering from Universidad del Atlántico in Reynosa, Mexico.