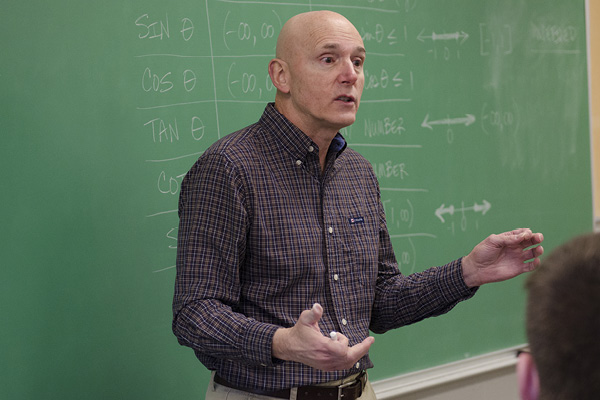 Stacy Key, who has taught mathematics and held numerous administrative positions at University of the Ozarks since 1999, has announced his retirement from the University at the end of the Spring 2022 Semester.

Key was an instructor of mathematics from 1999 until 2015, when he was promoted to associate professor of practice of mathematics. He has also served the University in various administrative positions, including coordinator of institutional research (2004-2007), coordinator of academic assessment (2007-2013), coordinator of the Critical Inquiry program for freshmen (2007-2012), chair of the Division of Natural Sciences and Mathematics (2013-2018) and Faculty Athletic Representative (2014-2018).

Key said the most enjoyable and fulfilling aspect of his time at Ozarks was the teaching, advising and mentoring of students, which led to many lifelong friendships.

“The ability that we have on our campus to interact with students in and out of the classroom is a powerful and important tool in understanding how learning takes place and how we can maximize the learning process,” he said. “This is true not only for students, but for faculty members as well. I have learned some valuable information and life lessons from my students.”

Helping students achieve beyond what they think is possible is what Key will miss the most about teaching.

“Certainly, I will miss the interactions that I have with students and colleagues,” he said. “However, my greatest loss might be the thrill, joy, and exhilaration that I get from watching students work harder than they believed possible, fighting through fears and tears, overcoming obstacles both real and imagined, with the end result of gaining lifelong skills and knowledge. Most of the time this is not the acquisition of content knowledge or book learning, but rather skills on the road to success in life and how to live that life through successes and failures. The successes are much more enjoyable, but sometimes not as valuable as the failures in the long run.”

Key was selected for the University’s Bagwell Outstanding Faculty Award in both 2002 and 2010. He has also spent most of his past 20 summers teaching at the Arkansas Governor’s School.

“When I think of my teaching career, I don’t have one or two miracle moments,” Key said. “I am most proud of my years of teaching and guiding on a daily basis and I hope that I have made a positive difference in the lives of my students.”

Key said he will cherish his time at Ozarks.

“I will always remember my time at the University of the Ozarks as a time of growth and maturing for me as a person, gaining a better understanding of what I have become as a man and what I need to do to improve as a human being.”

He already plans to keep busy in retirement.

“There are so many things that I want to accomplish that I have not had or not taken the time to do,” he said. “There are several personal projects that I will now have the time to work on.  I also want to do more traveling throughout our beautiful state of Arkansas, within areas of the United States that I have not yet visited, and in some regions outside the United States.”