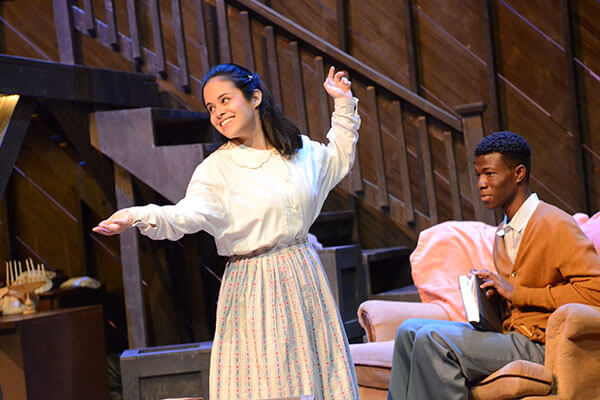 The first time Lacye Day performed on the theatrical stage was during a high school production of “Hamlet.” When the opening curtain went up she began to doubt her decision to be in the play.

“When I first saw the audience on opening night, I remember having this strong feeling of regret,” she said. “I was terrified that I would accidentally drop a line or forget the blocking.”

All that quickly changed. “Once I stepped on the stage and let go, I realized how much I loved it and how comfortable it felt. Since then, theatre has been my passion.”

Day is a University of the Ozarks junior theatre and psychology major from Oologah, Okla. In November she was awarded a prestigious Irene Ryan Acting Scholarship nomination for her powerful portrayal of Anne Frank in the University Theatre’s fall production of “The Diary of Anne Frank.”

Day first learned that incoming Theatre Professor Rebecca Bailey was planning a production of the Anne Frank play while Day was working a summer internship as a paints apprentice for the Hangar Theatre in Ithaca, N.Y.

“I had little knowledge of the original play and the revisions, so when I returned home I found ‘The Diary of a Young Girl’ online and began reading a few passages from Anne’s diary,” Day said. “At this point I didn’t have a strong connection to the show or story, but I was definitely excited to delve into such a powerful show.”

It was during the auditions for the role that Day first began to understand the main character’s spirituous persona.

“I was reading one of Anne’s many uplifting monologues and after working through it a few times with the director I began to feel the spirit and light that Anne is so well known for,” Day said. “Professor Bailey gave me a note at the end of the audition that still sits with me: ‘Never lose the smile. Anne has an everlasting smile.’”

Day said playing the role of Frank was far and away the most challenging of her young career.

“Anne is known for her spirit and endurance in the face of darkness, but it baffled me why or how she could possibly feel such joy in a miserable place,” Day said. “Preparing for Anne was a challenge all its own. Our dramaturg did extensive research in the historical aspects of the play as well as the Jewish traditions and early lives of each member of the annex. We each did individual research and presentations over our characters. We were also required to learn four songs — one in German and three in Hebrew — which involved a great amount of practice and collaboration. Though these preparations were extensive, they were essential to the accurate portrayal of the families.”

In order to better understand the Jewish faith, the theatre company also attended a Shabbat service at Temple B’Nai Israel in Little Rock.

“We toured the temple and were taught the various holidays, traditions and beliefs involved in Judaism,” she said. “This experience was helpful in understanding Anne’s unrelenting faith and desire to make others happy.”

With special performances for area schools, the cast and crew performed a total of five shows of the two-hour production over consecutive days, which left Day and her colleagues physically and mentally exhausted.

“The end scene was especially difficult to perform each night and involved a lot of hugging and crying backstage,” Day said. “On days when I felt drained, I reminded myself of the importance of Anne’s story and let her spirit motivate me to show the audience the incredible life she had.”

Day was particularly touched by the feedback she received from classmates and other audience members.

“We received many positive reviews from classmates and faculty members who were moved by the story and the effort involved,” she said. “Performing for the two schools was a growing experience for me as an actress. Both schools reacted differently when compared to the previous audiences and were more reactive to the events of the play. Many of the students who attended the play were the same age as Anne when she went into hiding, a factor that allowed me to focus on telling her story to the students. It is my hope that these students remember Anne’s story when faced with adversity or inequality and let that motivate them to act against it.”

Day said the role of Anne “has only intensified my desire to act and inspire others through theatre.”

“It is wonderful to be rewarded for our efforts in this show,” she said. “However, it is even more wonderful to know that Anne’s memory, and the memories of the six million, have not been forgotten.”

One of the production highlights for Day was an opportunity for the current company to meet several of the cast and crew from the 1988 U of O production of “The Diary of Anne Frank,” who had come back to campus for a mini-reunion and to watch the current version of the play.

“It was exciting to meet the alumni of the original Anne Frank cast and crew,” she said. “Our theatre department continues to put on excellent productions, but we know that we wouldn’t have the work space or tools without

the previous members of the theatre department. We listened to alumni reminisce about how bare and empty the work shop used to be compared to now. Seeing so many theatre lovers of different ages appreciating the art of theatre together was delightful.”

Day, who wants to pursue a career in either theatre or art therapy, said the University Theatre program has helped her grow her skills and talents in ways she never would have imagined.

“Prior to U of O, I attended a small high school with a limited theatre department,” Day said. “We were unable to build sets or design certain elements of a performance, so I didn’t have a lot of experience coming in. Since then I have gained both performance and technical skills that were essential to gaining an internship. I also gained experience working with various people from different backgrounds and learning how to communicate effectively with department heads.  The most rewarding part of being a theatre major is acquiring an essential set of skills such as time management, stress management, and developing a work ethic.”