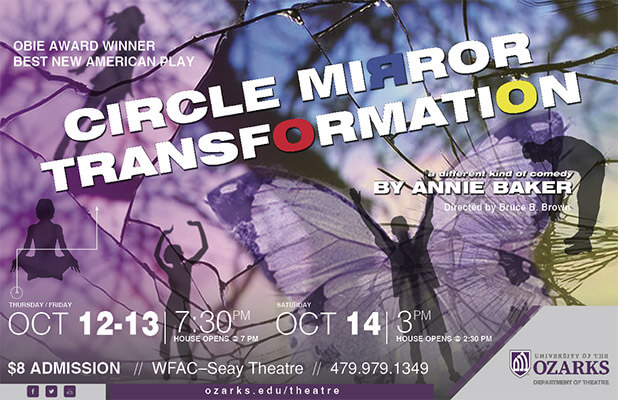 Seating is limited and guests are encouraged to purchase their tickets early on-line at  www.ozarks.edu/theatre. Tickets can also be purchased one hour before the show each day at the box office.

An Obie Award-winner, “Circle Mirror Transformation” is set in a small artsy town where an unlikely collection of four strangers sign up for Marty’s “Adult Creative Drama” class. The group includes a recently divorced carpenter, a high school junior, a former actress, and Marty’s husband. Unfolding like a charmingly funny indie film, the group plays Marty’s imaginative, and sometimes awkward, theatre games. But as their relationships develop over the course of the summer, the seemingly silly games generate some real-life drama.

The play landed on top 10 lists of The New York Times and The New Yorker for 2010. It was the second-most produced play in the United States that year.

The Cast and Crew