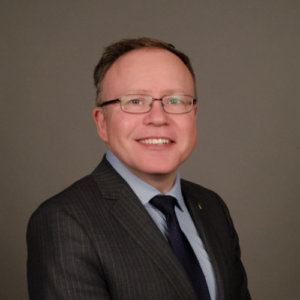 Richard L. Dunsworth, J.D., became the 25th president of University of the Ozarks in Clarksville, Ark., on June 1, 2013. Under Dunsworth’s leadership, enrollment at the private-four-year Presbyterian-affiliated university has increased 49 percent—from 585 in 2013 to 872 in 2018—and the university has been consistently ranked by U.S. News & World Report in its annual “Great Schools, Great Prices,” category. In 2018, he was elected to the Higher Learning Commission (HLC) Board of Trustees and in 2019 he was appointed to a four-year term on the National Collegiate Athletic Association (NCAA) Division III Presidents Council, the highest governing body in the division. He is the past chair of the President’s Council of the Arkansas Independent Colleges and Universities (AICU). Prior to arriving at Ozarks, Dunsworth was an administrator for 22 years at Millikin University in Decatur, Ill., where he served as interim president and vice president for enrollment. As vice president for enrollment at Millikin from 2004-2013, Dunsworth oversaw numerous departments, including academic development, admission, athletics, financial aid, institutional research, marketing, media relations, registrar, and student development. In addition, Dunsworth has extensive classroom experience, serving as an instructor in the Communication, English, and Political Science programs at Millikin. He co-designed and piloted the university’s first three-credit winter immersion course, Leadership and Conflict Mediation, and was a four-time recipient of the Outstanding Faculty/Staff Award presented by the university’s Interfraternity and Panhellenic councils. A native of Colorado, Dunsworth earned a bachelor of arts in political science from Colorado State University in Fort Collins, becoming the first person in his family to obtain a college degree. He went on to earn a master’s degree in education in 1994 from Eastern Illinois University in Charleston and a juris doctorate from the University of Illinois at Urbana-Champaign in 2002. He also earned certification from the institute for educational management program at the Harvard Graduate School of Education in 2008. He is a member of the NCAA Division III Financial Aid Committee and in 2017 was elected to the board of directors for the Association of Presbyterian Colleges and Universities (APCU). He and his wife, Holly, have three children, Nicolas, Matthew and Emma.