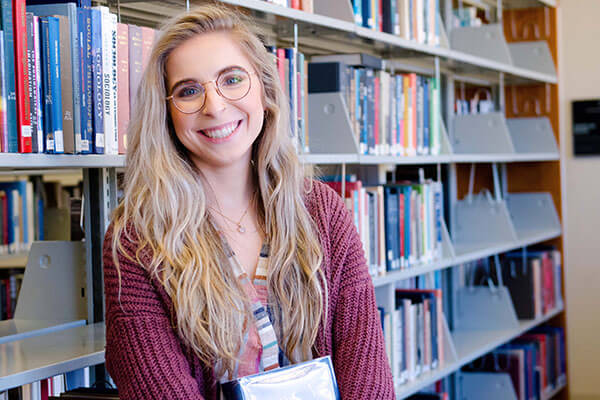 That was the win-win decision facing University of the Ozarks senior religion and philosophy major Emilie “Weave” Williams earlier this month on where to pursue a graduate degree after she was accepted into both of the prestigious Ivy league universities.

Williams said she learned that she had been accepted to Yale’s Master of Arts in Religion program when she woke up one morning earlier this semester and checked her email. The Harvard acceptance email came a few days later in the middle of Dr. Bill Eakin’s Existentialism class.

“I saw the email and I just kind of choked and lost my breath in the middle of the class,” Williams said. “Dr. Eakin stopped the lecture to ask what was going on and I just said, ‘Well, I just got into Harvard,’ and the entire class clapped for me. It was a really cool moment that I definitely wasn’t expecting to happen where or when it did.”

Williams said she was just an average high school student and never dreamed of attending graduate school in the Ivy League until she was inspired by her professors at Ozarks, including Dr. Dave Daily professor of religion, and Dr. David Strain, professor of English and classics.

“Everything changed for me when I came to Ozarks and found what I loved to study, and was surrounded by professors with top-tier respected degrees in their fields who loved what they did,” Williams said. “ Dr. Daily earned his master of divinity degree from Yale Divinity School after graduating from a small private university similar to Ozarks, and Dr. Strain earned a Ph.D. from Harvard. As a freshman, getting one-on-one attention and advising from them was intimidating because I thought they were part of some elite club, but they believed in me.”

One of the classes that inspired her to pursue religion and philosophy was Daily’s Approaches to the Study of Religion course.

“That course transformed the way I think of religious studies and religion in general,” she said. “I’ve always been more interested in the function of religion in society than strict theology and hermeneutics, and I read things in that class that honestly made me question everything I thought I once knew in the best way. It gave me a newfound respect for the sciences and gave me a healthy dose of skepticism. It’s the reason I’m going on to study philosophy of religion, and I think it prepared me for so many other courses I went on to take throughout college.”

Williams, who served as a coach for Interfaith Youth Core in 2018, began to seriously consider graduate school during junior year at Ozarks and remembers going to Daily for advice.

“I went to Dr. Daily’s office with a list of potential graduate schools that were all academically mid-level, because I was certain those were the only schools that would even read over my application,” she said. “He read them over and, at the end of our meeting, said he wanted me to look at two more schools — Harvard and Yale. I laughed at him, but he said he was serious. He said that not only would they be a good fit for me, but that he legitimately thought I could get in. He was really the driving force for me to even think of looking to Ivy Leagues, and I’m so glad he did.”

Williams then went about filling out the rigorous applications to both universities.

“The application process itself was pretty standard, except there is no interview — you are assessed off your application alone,” she said. “The applications are much more mentally and emotionally draining than other graduate programs because most people go into ministry of some kind with the degrees they earn. These questions were very existential and required you to think critically about the world at large, your place in it, and why you believe you in that particular position are the right person to earn this degree to bring about change.”

Once Williams learned that she had been accepted into the two highly competitive graduate programs, her reaction surprised herself.

“I thought I would cry, but I didn’t. I think I had been anticipating that moment for so long that when it finally happened, it just wasn’t as dramatic as I thought it would be,” she said. “It was just like, ‘Cool, my hard work has paid off and I’m proud of myself.’ I was far from my family that lives in Texas, but they’ve just been telling all their co-workers how proud and excited they are for me, but they’ve been shockingly relaxed about it all. My friends, on the other hand, have been crazy excited. We had like three entire days of celebrations after everything was official. It’s been awesome to have so much support from my Ozarks community and to feel like I’ve made my professors and mentors here proud.”

“Both campuses had an admitted students’ day in early April so I booked a trip to go get a feel for the vibe of both places, now that the intimidation factor was gone,” she said. “I’m so glad I went back up. I met with several other prospective students who had also been admitted to both divinity schools and were weighing their options. It was nice to know I wasn’t the only one going through that decision-making process, and that I wasn’t crazy for considering two schools that were incredibly different. Ultimately, with my interests in diversity and working with people of different racial and religious backgrounds was a higher priority, and Harvard happened to have that. Turning down a full scholarship to Yale was incredibly difficult, but I had to go with my gut.”

Williams, whose career aspirations include attaining a Ph.D. and going into academia, said Ozarks has helped empower her to take on new challenges.

“I’ve grown to trust myself and my capabilities,” she said. “When I arrived my freshman year, I was very insecure and would constantly compare myself to others. Now, I’ve become more competitive with myself and it has made a world of difference. Choosing a more ‘rare’ major with smaller class sizes pushed me to do this naturally. I loved what I was studying and wasn’t trying to impress anyone else. I was just simply doing the work for myself.”