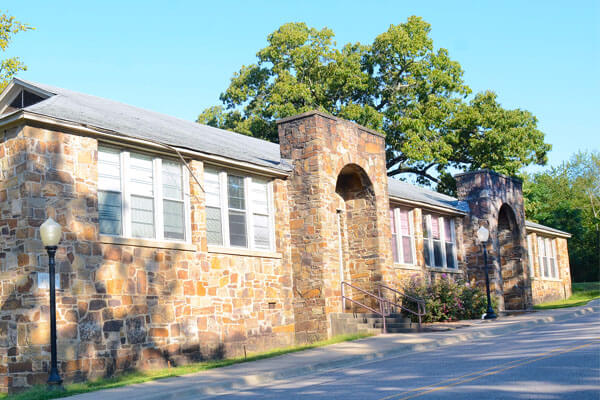 Voorhees School, the University of the Ozarks’ iconic rock-walled building that has anchored the southwest corner of campus for nearly eight decades, has been selected for inclusion into the prestigious National Register of Historic Places.

Known as Voorhees Hall for much of the past 70 years, it was among 30 properties throughout the U.S. named to the national register by the National Park Service earlier this month. The register is the official list of the nation’s historic places worthy of preservation.

Completed in 1941 as Voorhees School, it is the third U of O property on the National Register of Historic Places, joining Munger-Wilson Memorial Chapel (1933) and MacLean Hall (1927).

“Voorhees School tells a story of alumni spirit and the University’s faithful tradition of service to its community, state, and nation,” said U of O President Richard Dunsworth. “The designation is important to University of the Ozarks because it’s a resource that will help the University continue to grow its legacy as a high-quality liberal arts college that honors the people who carved out such an impressive history in the landscape of time.”

Construction on Voorhees began in the late 1930s as a joint project between the college and the Clarksville schools. It was built by the National Youth Administration (NYA) for $21,700 and named after Mary T. Voorhees of Clinton, N.J., who made several donations for the construction of the building.

Voorhees School was originally used as a practice teaching school by the college’s education students to teach ninth-graders in the Clarksville area.

It was used as a school for just over a year before the college turned over the campus to the U.S. Navy during World War II in 1944-45 to be used as a training facility. Voorhees was one of the primary teaching facilities for the early radar training during the 16-month period the Navy utilized the campus.

Over the years, the building has housed the state’s first pharmacy school as well as a student union, alumni and public relations offices, an art museum and art classes, the Walton International Scholarship Program offices and psychology laboratories.

It is currently being renovated and will be leased as a restaurant by Shane and Angela Kasper, former owners of Pasta Grill in Clarksville. Kasper’s restaurant is expected to open in January.

Authorized by the National Historic Preservation Act of 1966, the National Park Service’s National Register of Historic Places is part of a national program to coordinate and support public and private efforts to identify, evaluate, and protect America’s historic and archeological resources.