By cnp
Posted in Political Science 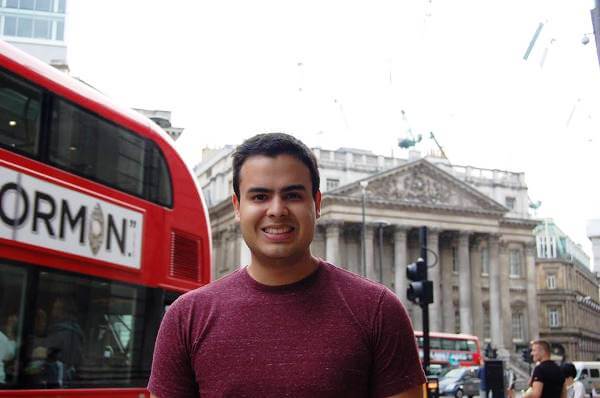 A meeting with the former vice president of Nicaragua has turned into a monumental opportunity for one aspiring economist and politician from Central America.

Gerardo Navarrete, a senior economics and political science major from El Salvador, had the opportunity to present a paper to former Nicaraguan vice president Sergio Ramirez during the dignitary’s visit to campus in early March as part of the Walton Arts & Ideas Series. Ramirez, an accomplished novelist, liked Navarrete’s paper so much that he offered to publish it in an upcoming issue of “Caratula,” a Spanish online literary magazine that Ramirez owns.

Navarrete’s paper was a literary critique of Ramirez’s 2002 novel “Only Shadows,” which tells the fictional story of an unfair trial against Alirio Martinica, an ex-collaborator of the dictator Anastasio Somoza Debayle. Navarrete’s paper compared the power relations that are depicted in the novel with the behavior of dictatorships in Latin America.

“Mr. Ramirez gives voice to Alirio’s story that turns out to be more complicated than what the indignant revolutionary prosecutors expected or wanted to hear,” Navarrete said. “The prosecutors then changed Alirio’s story in order to vilify him and justify his summary execution. For me, what the prosecution did summarizes very well the main reason why all revolutions have failed in Latin America. The revolutionaries become even more repressive and corrupt than the dictators they replace.”

Navarrete was one of three students invited to present a paper to Ramirez by Associate Professor of Spanish Dr. Bill Clary.

“I wrote the paper because I liked the novel and because I was encouraged by Dr. Clary,” Navarrete said. “I had read the novel a couple of years ago and I was enthralled. I didn’t know at the time that Mr. Ramirez was such a good novelist. I only knew about his political life and his political analysis that were published every Sunday in a Salvadorian magazine. The novel was, in my opinion, a masterpiece. It compares to some of the great works of Nobel Prize laureates.”

Navarrete said he was hesitant at first to write the paper because he had never written a literary critique.

“It was a little intimidating to present a paper to a living author,” he said. “I had written papers and opinion pieces before, but I’ve never attempted something that I felt would be worthy of publication. I loved the depth and storytelling techniques of Mr. Ramirez that make the novel sound as if it’s a real document. Coleridge would call it suspension of disbelief. It took me by surprise because around Page 156 I began to believe it was a real account of what happened in the Nicaraguan revolution. I think that is why many critics regard him as an outstanding Neorealist writer.”

A few days after Ramirez left campus, Navarrete received a personal email from the man who served as vice president of Nicaragua from 1985-1990.

“He told me that he was going to publish my paper in his magazine, ‘Caratula,’” Navarrete said. “At first I thought that it was a mistake, but it wasn’t. He asked if I had more papers about other Central American writers. I don’t think he expected my confession that it was my first and only paper about a Central American novelist.”

With professional aspirations of helping to improve his country’s economy and perhaps running for public office one day, Navarrete said getting to meet Ramirez was a “wonderful blessing.”

“It was one of those things that could only happen at Ozarks,” he said. “This college is unique in the way that it’s small, yet big enough to give students the privilege of meeting these great speakers who come to campus. I never would have thought I would get to meet a world figure and literary giant of the stature of Mr. Ramirez. It is definitely one of those anecdotes I will tell to my grandchildren.”

After graduating in May, Navarrete plans to travel some before pursuing a master’s degree in finance.

I want to eventually get involved in the politics of my country,” he said. “I believe that El Salvador has a very old political class and we, as students, can complain all we want but the reality will not change if we don’t get involved. I am convinced that most of the problems we have right now in Central America, such as poverty and violence, have developed over time because of people’s apathy to participate. I want to change that.”