By cnp
Posted in Sociology 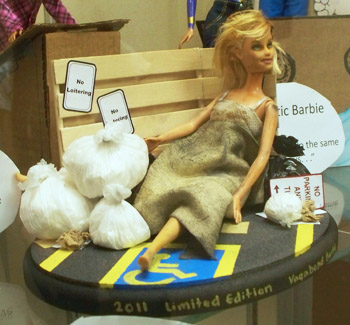 In what Dr. Jesse Weiss says may have been the toughest competition to date, 13 re-imagined Barbie and Ken dolls vied for the title of “Barbie Bash 2012 Champion” in his spring Social Problems class.?But in the end, it was Vagabond Barbie who took the win, narrowly edging out Popeye Barbie and Playboy Bunny Ken.

Vagabond Barbie, the creation of Jessica Osterdock and Brandon Neal, was the winner of Barbie Bash 2012. She and the other re-imagined dolls will be on display in the Smith-Broyles Science Center for the rest of the semester.

Just who is this previously unknown Barbie? Vagabond Barbie is the re-imagined toy created by students Jessica Osterdock and Brandon Neal. As she made her way up to the front of the class, Weiss looked curiously at the unkempt Barbie and asked, “Who do we have here?”

“She’s a hobo,” elaborated Osterdock. “Barbie is usually the pretty girl. She has the great car, the clothes, the friends, the long sleek hair…this Barbie – not so much, at all. She just kind of went crazy and then didn’t have a chance to get herself back out of the hole so now she’s on the street.”

“Yes,” Osterdock confirmed, as Neal elaborated. “The stereotype Barbie gives off is that you always see Barbie as the one that always does nothing but accessorize, and plays little dress up parties and what not,” he said. “But the thing is, she always achieves every career she ever wanted. She’s ‘Nurse Barbie,’ ‘Vet Barbie’ – any aspiration or ambition she has, she always achieves that. But all she ever does is play dress up. There needs to be a correlation between if you ever want to get anywhere you have to apply yourself, do hard work. Playing dress up, playing around – not actually applying any hard work – that’s not going to land you those jobs that Barbie always gets.”

“So this Barbie didn’t work hard so she ended up on the street?” Weiss asked.

“What sort of message do you think this would send to kids?” Weiss then asked.

“What NOT to do,” they exclaimed in unison.

By challenging the accepted Barbie stereotype, Vagabond Barbie has finally achieved the fame and success she was destined for, joining previous Barbie Bash winners Hooter-licious Ken and Ballerina Ken.

All joking aside, Vagabond Barbie and the other 12 re-imagined dolls in the Barbie Bash competition have accomplished exactly what Weiss had in mind when he first gave the assignment three years ago. Weiss said that even with their sometimes off-the-wall names, the re-imagined dolls have caused his students to really think about what it means to be male or female in our society.

Weiss said the idea for Barbie Bash came a few years ago, when he read about a professor at Utah State University who used Barbie dolls as part of a project for a mass communications course. “Everybody knows about Barbie…everybody has seen a Barbie doll,” he said. So he decided to ask his students to do something similar; to re-imagine one of the dolls as a way to get them thinking about the social problems associated with gender in a way that was active and creative.

Too often, Weiss says, the toys we give our kids are very limiting in showing ideas about masculinity or femininity. “This is especially the case for little girls, who get very limited into that kind of ‘domestic role’ because they’re socialized into that,” he said. “The toys they play with reinforce that. You can walk down the aisle at the store and see a very clear difference between the masculine toys and the feminine toys. We’re raising boys to be one way, and girls to be another way.”

So what exactly does it mean to “re-imagine” a doll? Essentially, Weiss said, the students are asked to redesign their doll so that it no longer conforms to society’s definition of accepted male or female roles. They come up with clothing and props that support the doll’s new gender role, then present their creation to the class, explaining how the doll challenges traditional gender norms, and describing what type of message the doll would send to a child who purchased and played with it.

The assignment has generated some pretty interesting characters over the past three years. Weiss thinks this is because it gets the students to think about the impact that things we take for granted – like the toys we give to our children – can have on how we grow up, how we socialize, and on how we interact with one another. He said the students in this class upped the ante, coming up with dolls that challenge an even broader range of gender stereotypes than ever before. In addition to Vagabond Barbie, students re-imagined:

Weiss said that while one goal of the assignment is to have students think about how their doll breaks traditional gender stereotypes another equally important goal is to get students to recognize how society reacts to people who are outside the norm. Pointing out Sports Fanatic Barbie and Break-up (Emotional) Ken, he said, “We have very negative stereotypes for girls that are physically active and that are competitive, just like we have negative stereotypes for boys that are not competitive or who are emotional, or who don’t necessarily meet those standards,” he said. “It’s pretty significant, because gender is a really important aspect of our ‘self.’ It’s very important culturally, but it’s also very important individually.”

Interestingly enough, Weiss said that this year is the first time Barbie has actually won the Barbie Bash. Why is that? “Perhaps for men, if they engage in gender behavior that isn’t appropriate, the stakes are a lot higher,” he suggested. “A man who is a ballerina is far more attention-grabbing than a woman who is a soldier. I think it shows that men are just as constrained [as women]. Yeah, we live in a patriarchy, yeah, it’s male-dominated, but it doesn’t mean there aren’t effects and impacts that men feel, and that they’re not constrained by their gender in the same way women are.”

While getting students to recognize gender stereotypes and the factors that influence our behavior is an important lesson, Weiss said that perhaps the most critical thing he hopes students learn from the Barbie Bash is this: from a sociological perspective, difference isn’t a problem; the problem comes when the difference is used to differentiate and discriminate. “The fact that men and women are different is not an issue – it’s true,” Weiss said. As a sociologist, Weiss said he tries to convey to his students the importance of valuing things equally, because humans tend to behave toward things in a way that reflects how they value them. “We de-value women in our society,” he said. “Certainly women participate in their own subjugation, but that doesn’t make it ok. That’s the overall point of the assignment – to get the students thinking about some of those things in a real-world way. If I can get them to start reading between the lines and thinking critically and adopting the sociological perspective, that’s a victory, right?”