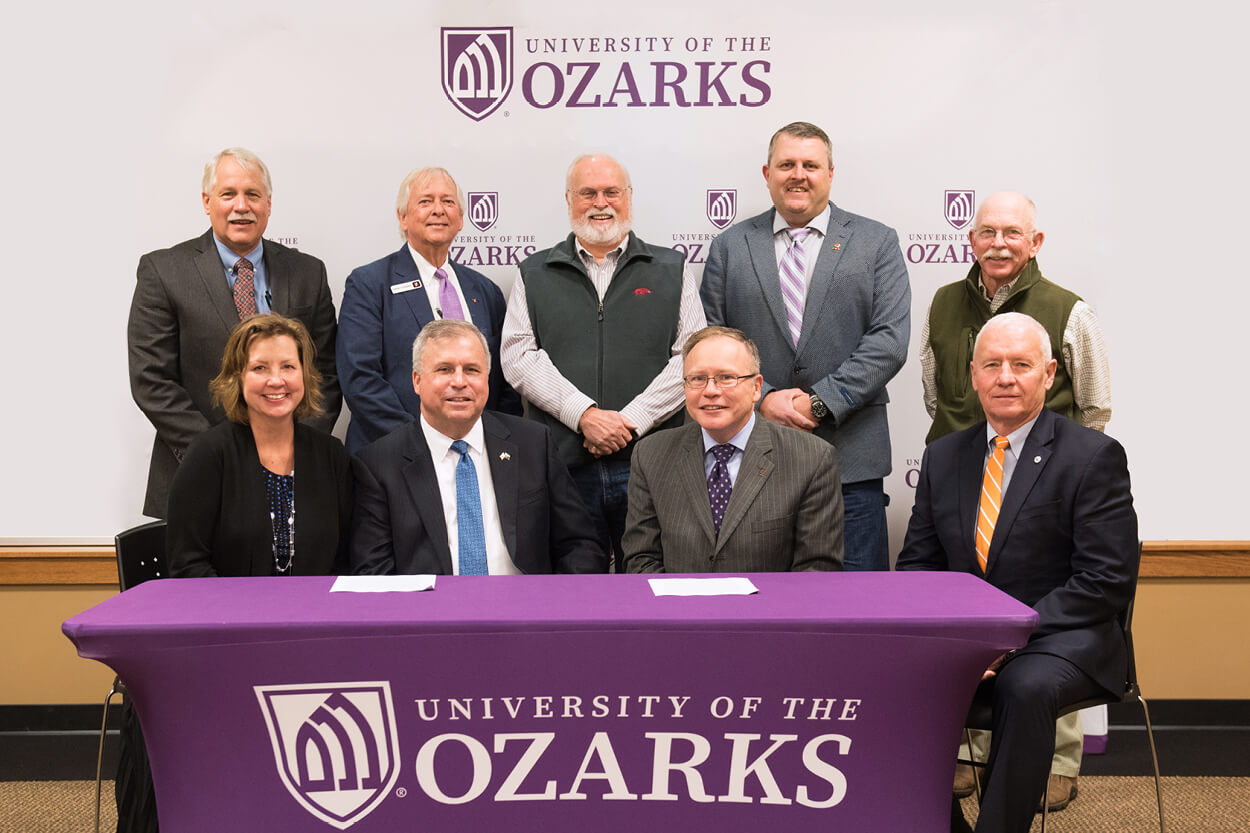 University of the Ozarks has entered into an affiliation with the Greystone Preparatory School and will house their military programs at the University, beginning the summer of 2020. Greystone officials were on campus this week to finalize the agreement.

Greystone, which has been based at Schreiner University in Kerrville, Texas, for the past 16 years, has both a one-year and a new four-year program for students planning a career in military leadership. The one-year program is a college-level academy preparatory school that prepares candidates for nomination, appointment and success at one of the five U.S. service academies: the Military Academy at West Point, N.Y.; the Naval Academy at Annapolis, Md.; the Air Force Academy in Colorado Springs, Colo.; the Coast Guard Academy in New London, Conn.; or the Merchant Marine Academy at Kings Point, N.Y.

The new four-year program is for U of O students enrolled in either the Army Reserve Officer Training Corps (ROTC), Navy Baccalaureate Degree Completion Program, United States Marine Corps Platoon Leaders Class, Coast Guard Scholars Program, Officer Candidate School or who are veterans. All programs potentially lead students to not only earning their bachelor’s degree, but ultimately a commission as an officer in the Armed Forces.

Greystone is best known for its success with academy candidates who aspire to earn their nomination and appointment to one of the five federal service academies. For those seeking their academy appointments, the Greystone motto is “Academy Preparation, University Education,” which reflects its unique level of academy preparation. It is the only academy prep school in the nation affiliated with a four-year, fully accredited university.

Over the course of the last 16 years, Greystone has helped over 475 young men and women to realize their dream of military service as academy trained and educated leaders of character while at Schreiner University. Greystone at Ozarks will now utilize its unique program of structure, organization and oversight to expand their capacity and assist those who seek their commission as officers in the Armed Forces through the other military commissioning programs.

U of O was selected by Greystone from more than 130 colleges and universities from around the country that met its very high academic, athletic and facilities standards.

“It’s a tremendous honor to be selected to join into a partnership with a prestigious program that has a long and proven track record of success in preparing young people to serve our nation in the academies and as commissioned officers,” said U of O President Richard Dunsworth. “Being selected by Greystone is a wonderful testament to the great work that our faculty, staff and board of trustees are doing in educating and preparing our students for their next steps. We look forward to helping Greystone continue its success of developing tomorrow’s military leaders.”

University officials expect about 20 Greystone freshmen on campus for the start of the Fall 2020 Semester and up to 50 students in the program within 2-3 years.

Under the affiliation model, Greystone academy-bound students will be full-time U of O freshmen and can earn up to 38 transferrable college credits. All Ozarks courses will be in sync with military academy first-year courses which enable many students to validate, or test out of, academy courses which provide these students with a significant advantage over other students entering the academies directly from high school or any other academy prep school.

The Greystone program was started by retired Navy Commander David Bailey, a 1981 graduate of the U.S. Naval Academy who remains the program’s executive director. According to Bailey, the Greystone model is simple — combine the strength and flexibility of a four-year, fully-accredited liberal arts university with a dynamic academy preparatory program that was specially designed by academy faculty, staff and alumni intended to maximize the scholastic, athletic and leadership credentials of each candidate.

“For Greystone, the easy part of the academy process is getting these students their nomination and appointment and the hard part is to keep them at the academies for four years so they can graduate and earn their commission as an officer,” Bailey said. “Greystone is not a one-year academy prep program, but rather a life-long commitment to these leaders ensuring they succeed. Over the past 16 years, of all the Greystone students who have entered the academies, 94% graduate and go on to serve and lead.”

Regarding the Greystone four-year program, Bailey said, “Greystone will utilize the same academy prep program it currently employs to oversee the academic, athletic and leadership development of these outstanding young people. As these four-year students advance at U of O, they will not only excel academically, but they will be afforded expanded leadership opportunities and experience to ensure these students not only graduate in four years, but they will exceed the expectations of their respective commissioning program – which starts their military careers by enabling them to stand out from all others in the same programs nationwide.”

Bailey added, “I am looking forward to joining the Ozarks campus community and serving the needs of those young patriots who aspire to serve this great nation.”

The Greystone program will be housed in one of the University’s apartment-style residence halls. Dunsworth said the University may hire additional faculty, particularly in mathematics and the sciences, to accommodate the curriculum needs of Greystone students.