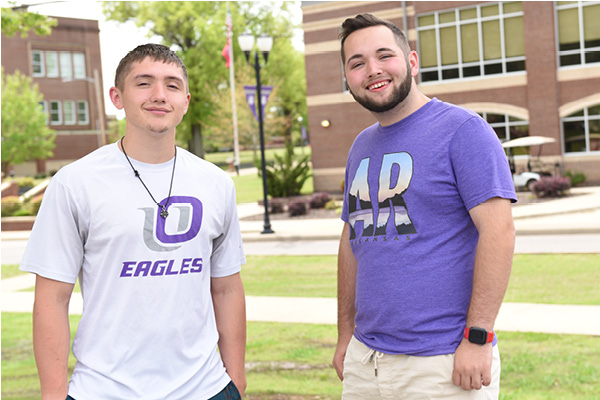 Stormes (pictured, left) and Houston were among several students elected recently to hold leadership positions in SGA for the 2022-23 academic year at University of the Ozarks.

Stormes is a rising junior from Fort Smith, Ark., who is majoring in biology and philosophy. He is a member of Tri-Beta, Eagle Productions and the Ozarks Biological Society. He also is a resident assistant (RA) and a member of the track and cross country teams.

Stormes said he ran for SGA president to help give students a voice in decisions on campus.

Stormes said his goal is “to show students SGA can create change.”

“I want to push SGA into the light and make it known to every student,” he said. “SGA has passed many proposals, but what ultimately gets proposed is put forth by students. We also want to recognize the importance of clubs and organizations at Ozarks. Not enough spotlight is put on what the different clubs at Ozarks represent and have accomplished. One of the big things SGA is pushing for is a Leader’s Banquet to recognize the accomplishments of different clubs and organizations at Ozarks. I enjoy the sense of community for better or worse at Ozarks. It allows for someone to be more connected and involved then they might be at a larger institution. This creates a better sense of community and focuses on the individual.”

Houston is a health science and business administration major from Scranton, Ark. The rising senior has been involved with SGA and Eagle Productions and is an RA, Ozarks Experience Mentor and Student Ambassador.

Houston, who plans to pursue a career in athletic training, said he also ran to help his fellow students.

“I ran for SGA because I wanted to be there for the students of Ozarks,” he said. “I have always been a big person on helping everyone and anyone, no matter what. I want to be able to continue to do that as vice president of SGA, listening and helping students because that’s what matters to me. We want to be the voice for the students, letting everyone know what SGA is, what we have already done for Ozarks, and what we plan to do for the next year.”