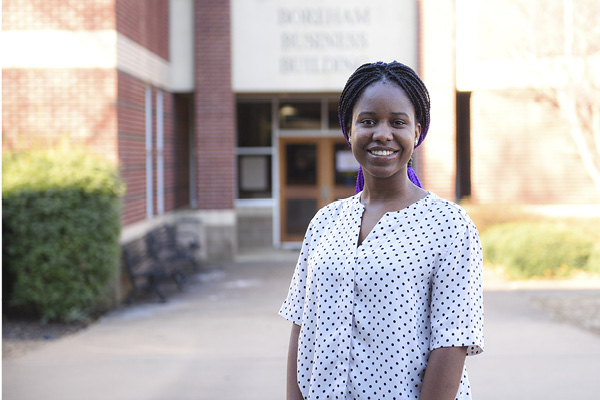 Still three months away from graduating, University of the Ozarks senior Brilliant Pasipanodya has already aced one of her most important tests.

The math and business administration major from Harare, Zimbabwe, has secured a full-time position with BlackRock, Inc., a multinational investment management corporation and the world’s largest asset manager. Pasipanodya will serve as an analyst in the corporation’s Business Operations group in Atlanta, starting Aug. 1.

Pasipanodya was offered the job on Feb. 2 after several online interviews with the company. She got the offer during a Webex meeting by the vice president of campus recruiting.

“He told me that the teams I had interviewed with spoke highly of me and therefore BlackRock was extending an offer,” she said, “ I could not believe it. Getting a job offer from the largest asset manager in the world is a dream come true for me. The first person I told was my boyfriend. I had to wake him up because he was sleeping in Zimbabwe. He was so excited about the news.”

Pasipanodya said she entered college planning to pursue a career in engineering but a quickly developing love of math and business steered her toward finance. Once she learned about BlackRock, she was determined to pursue a position with the company.

“Before I applied, I knew that BlackRock was a big finance company and I came across the analyst position while I was searching for full-time positions on the internet,” she said. “The position suited my profile and I also liked BlackRock’s purpose, which is to help more and more people experience financial well-being. I really connected to its mission and principles.”

The job offer came after several months of diligence and persistence.

“It was a lot of work. I put so many hours on the resume, job search, networking and interviews,” Pasipanodya said. “The BlackRock process began in September of 2021 and between then until the offer I went through a lot of interview coaching, did thorough research and really prepared.”

Pasipanodya credited the University’s Career Services Office as well as her Ozarks professors for helping her navigate the job-search process.

“I had so much support from the Ozarks community,” she said. “I also received the senior development fund that helped me with my interview attire. I had three rounds of video interviews for this position and having that financial support really helped. I received a lot of help on my resume from the Career Services Office. I got rooms reserved for my interviews in the library and the Chapel. There was just so much assistance I got from my professors and from the staff at Ozarks. My advisor, Dr. Matt Myers, was also very supportive. I almost dropped my math major because it was so challenging, and he encouraged me to soldier on. I am so grateful for all the support I received because I certainly could not do this alone.”

She also gave credit for her successful job search to an internship she had during the summer of her junior year at Simbisa Brands in Zimbabwe.

“I was a business operations and management intern for two months,” she said. “I had the opportunity to work with different teams, such as human resources, corporate office and marketing. At the end, I provided a detailed report on the brands’ strengths, weaknesses and areas of improvement. The internship helped me with my analytical, interpersonal and critical-thinking skills. It was such a valuable experience.”

During her time at Ozarks, Pasipanodya has shown that she’s not afraid of hard work. She has served as a student-worker in a number of areas, including the cafeteria, grounds and maintenance and in the printing and engraving shop. She has also worked as a tutor and in the administrative suite.

“I think I get my work ethic from my mother,” she said. “My mother has always instilled in me the importance of hard work and that’s something that just comes natural. My on-campus work experience was very valuable in my job search. Ozarks taught me that all work experience is good work experience, whether it’s in the cafeteria or in an office.”

While studying in a foreign country has its challenges, Pasipanodya found a strong support team, both on-campus and off. She credits her host parents, Chris and Heather Dickerson, and her church, the Link Church, in helping alleviate any homesickness.

“Being a small college, Ozarks has a very supportive community. The professors really care about students and the staff also takes time to know students and support them,” she said. “I have so many special moments here and most of them were shared with my friends, my host family and my church family.”

She said deciding to pursue an education at Ozarks has been one of her best decisions.

“The liberal arts education that Ozarks offers allowed me to explore so many areas and to realize that my options are limitless,” Pasipanodya said. “The diverse student body at Ozarks allowed me to learn so much from other students and be able to relate more with people from different cultures”