By cnp
Posted in Philosophy 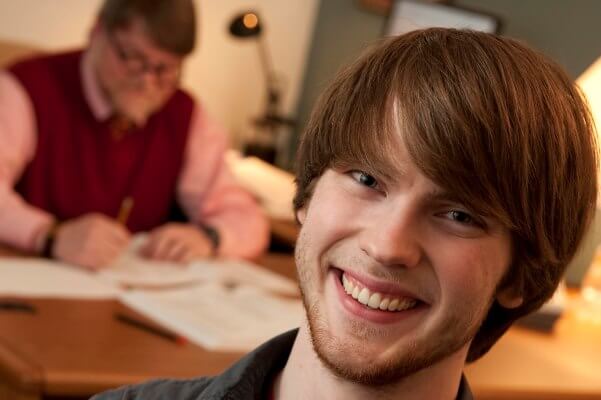 There are many students who think about going to law school when they graduate, and most of them probably wonder at some point what it’s really like.

Jack Rossmaier knows, and he is happy to talk about it.

Jack graduated from Ozarks in the spring of 2010 with a degree in Philosophy. Now law school might seem to be an obvious choice for a philosophy major, but for Jack, the decision grew out of some unique and interesting experiences he had at Ozarks.

During his junior year, Jack signed up for the Irish-American scholars program, arranged through the Ozarks Abroad program. Through this program, Jack spent a semester abroad, studying philosophy of law at Queens University in Northern Ireland. Building on Jack’s interest in that course, Ozarks Professor of Philosophy Dr. Bill Eakin developed a unique course that examined the philosophy of human rights. This course along with his experience at Queens University helped shape Jack’s senior seminar in philosophy and ultimately led to his decision to pursue his law degree.  He was admitted to University of Michigan Law School on a Dean’s scholarship and began his coursework in the fall of 2010.

Now that Jack is finishing up his first year of law school, Ozarks Web Content Writer Don Lee asked him to share his perspectives with other students who might be thinking of applying to law school.

“Law school is a lot of work, without putting too fine a point on it,” Jack said. “There are aspects of it that I think can be very intimidating for some. I’ve decided that becoming a good law student means learning how to read and write all over again, because you’re working in an idiom that you likely have had little exposure to, if any.”

“Studying philosophy at Ozarks trained me to evaluate arguments, which is what a great deal of law school is about,” he explained. “The curriculum at Ozarks helped me to understand how problems are approached from a variety of perspectives, so I don’t see legal problems as just a philosopher, or just an economist, or just an anything, while still appreciating all those approaches. That’s a very useful skill.”

Were his expectations of law school different from the reality of being there? “I suppose one thing that is different is that a lot of people have the image of the law student, especially at a top ten school, as being this hypercompetitive, cutthroat, type-A nut job,” he said. “At least at Michigan, that’s definitely not the case. The atmosphere is very congenial. I enjoy it.”

“Every class is filled with people who have worked for the United Nations, human rights organizations, as police officers, opera performers, professional dancers, Truman scholars, Fulbright scholars, military veterans, Peace Corps alumni, PhDs, graduates from Ivy League universities, NYU, Chicago, Stanford, and yes, Southern liberal arts colleges,” he said. “One of the leading authorities on the Uniform Commercial Code taught me contract law, and my Constitutional Law professor is mentioned in legal circles as a potential Supreme Court nominee. There are so many incredibly smart, incredibly interesting people here.”

Despite the heavy workload, Jack said he made sure to set aside some time to relax. “It’s important to maintain a social life ‘outside of the law quad.’ Once you’re in, make friends, not contacts. Socialize, don’t network. You’re going to come off as incredibly annoying otherwise, and it’ll be your friends who will get you through law school anyway. Probably once a week I’ll meet some friends for drinks. I also joined the law school a cappella group as a way of staying sane. It’s at least four hours a week where I don’t have to think about the law at all,” he added with a laugh.”

As this first year draws to a close, Jack outlined what’s next for him. “It’s kind of expected that you get an internship somewhere over the summer,” he said. “Then, in your second and third years you can do clinics, which are great for showing you how law is actually practiced in a particular area, for example human trafficking, employment law, etc.,” he said. “And of course, law review, which will take up a lot of your time if you grab a spot.”

Jack offers this advice for students who might be considering law school: “Get started as early as you can in the application process, and take advantage of preview weekends and the like,” he advises. “Try to get a sense of not only what law school is like generally, but what the particular law school you’re considering is like. Some of that can only come from being there, talking to current students, attending sample classes and so forth. I wish I had done more of that kind of thing. Some of law school is learning-by-doing, but really try to get as strong a sense as you can beforehand, while taking what you read online with a heavy pinch of salt.”

Has actually being in law school changed any of his plans? Not so much. “My plans were pretty flexible to begin with, so I don’t think first year has changed them all that much. It’s opened up some possibilities, directions in the law I might go that I hadn’t considered before. But it’s still too early to tell at this point. That will have to become more definite over the next two years as I get exposed to more legal practice. But not now.  I like open doors.”