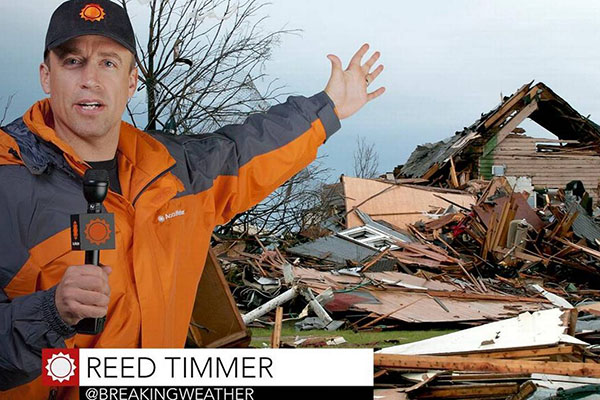 Extreme meteorologist and storm chaser Dr. Reed Timmer will kick off the University of the Ozarks’ 2018-19 Walton Arts & Ideas Series with an appearance on Thursday, Sept. 27, in the Rogers Conference Center.

The six-event series, titled “Synergy: When Arts and Science Collide,” will run throughout the academic year at the University.

Made possible through an endowment by the Walton Family Charitable Support Foundation, the events in the series are open to the public and there is no cost for admission.

Timmer will discuss his career as a TV meteorologist and celebrated storm chaser.  He is well-known for his tenure on Discovery Channel’s Storm Chasers television series from 2008-2011, and the intercepting of tornadoes using custom-built, armored tank-like vehicles called the Dominators.

Timmer has been storm chasing for Accuweather for the last two years, providing coverage of extreme weather in the United States, such as tornadoes, hurricanes, blizzards and flash floods. He has documented over 1,000 tornadoes and dozens of hurricanes in 18 years of storm chasing, including historic extreme weather events like Hurricane Katrina in 2005 and the Super Outbreak in “Dixie Alley” in April of 2011. Reed published an autobiographical and educational book, “Into The Storm,” in 2010 and completed his Ph.D. in meteorology from the University of Oklahoma in 2015.

On Oct. 25, 3D technology expert Jen Owen will present a talk at Ozarks. Owen has dedicated her life’s work to advocating for and advancing 3D printed hands and arms for those who have lost them due to war, accident, natural disaster or disease. She is the founder and owner of enablingthefuture.org.

The series continues on Nov., 15, with “Finding the Cures,” a panel discussion on the research and treatment of important diseases such as cancer and Alzheimer’s. The panel will be made up of doctors and researchers from throughout the country, including Dr. Tim Hallstrom from the Division of Blood and Bone Marrow Transplantation at the University of Minnesota and Dr. Xiaoting Zhang from the Department of Cancer Biology at the University of Cincinnati College of Medicine.

Following Christmas break, the series continues on Feb. 7, with an appearance by National Geographic author and photographer Tom Clynes, who travels the world covering the adventurous side of science. He is the author of three books, including the 2015 publication, “The Boy Who Played with Fusion,” which tells the story of a 14-year-old science prodigy from Texarkana, Ark., who became the youngest person on Earth to build a working nuclear fusion reactor.

On March 7, Morgan Dameron will make a presentation about her career as a writer, producer and filmmaker. The Kansas City, Mo., native has worked on such films as “Star Trek Into Darkness” and “Star Wars: The Force Awakens.” Her feature directorial debut, “Different Flowers,” recently premiered to sold out crowds at the Santa Barbara International Film Festival.

The series concludes on April 11 with a presentation titled, “Healing Through the Arts,” from U of O alumna and art therapist Dr. Amanda (Alders) Pike. The 2005 Ozarks graduate is a board-certified art therapist and has owned her own agency that hired, trained, placed and supervised art therapists in locations such as assisted living facilities, homeless shelters and eating disorder and substance abuse recovery treatment centers.

For more information about the University of the Ozarks’ 2018-19 Walton Arts & Ideas Series, please contact the Office of Marketing and Public Relations at 479-979-1433.