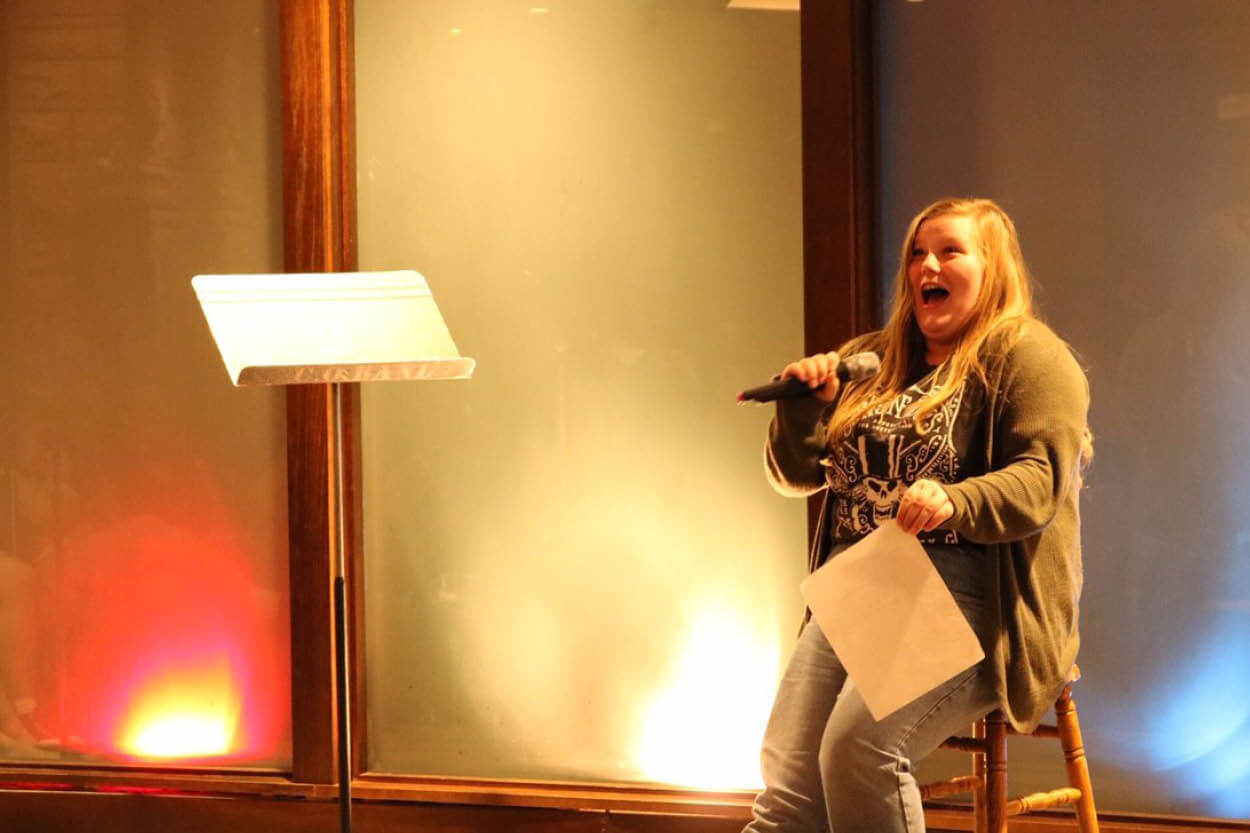 Fourteen years ago, University of the Ozarks English Professor David Strain had an idea only a mad poetry scientist could cook up. Strain and his fellow English professors were looking for a way to boost submissions to the department’s annual Falstaff literary magazine when inspiration struck from an unlikely source: the reality TV show Project Runway. That epiphany would eventually become the annual Project Poet competition, which is currently enjoying its 14th season as a cornerstone of Ozarks campus life.

No one has seen the impact of Project Poet more than English Professor Brian Hardman, who served as the host for nine seasons of the event, more than any other host.

“I was interested from the start because of how unique the event was, and I loved the idea of giving students across campus a creative space to push themselves and to share their voices,” Hardman remembers.

Project Poet’s run at Ozarks has seen a number of transformations on campus and has changed itself along the way.

“The event has moved locations several times, which has allowed it to grow and evolve. The show is also more sophisticated in its use of atmosphere and production quality, and the talent has increased year after year,” Hardman says. “I hope it continues to grow and evolve, and I hope that it continues as a powerful venue for students to express their talents, voices, and experiences.”

Though the venue and atmosphere may have changed over the years, the competition itself is essentially the same. Each fall semester, one member of the English department sends out a poetry challenge to the campus community, and the students who enter must submit an original poem that meets the challenge, which may vary from a poetic self-portrait to a sonnet or haiku. There are five separate challenges over the five-week competition, and the poets must write a new poem for each challenge.

The poets themselves come to Project Poet from all walks of campus life and for all sorts of reasons. Some, such as Jarret Bain, a junior psychology major from Nassau, Bahamas, enter Project Poet as a way to get out of their comfort zone. “I didn’t expect to get very far, but whether or not I made it far, I was in it for the experience,” Bain explains.

For Bekah Moore, a senior biology major from Alma, AR, what was initially an extra credit opportunity quickly became a new passion. Though Moore’s high school had largely treated poetry as “a necessity that students and teachers alike were more than willing to cross off of their to-do list,” she was blown away by the inclusive artistic community she found at Ozarks through Project Poet. “The reverence this campus has for the arts, and its various forms, will always amaze me,” Moore says.

Both Bain and Moore placed among last year’s five finalists, and their diverse backgrounds and motivations are not unusual in the competition.

“Project Poet draws students from across campus and from all disciplines,” Hardman says. “It really says something that, as often as not, English majors aren’t the ones who always win the crown of Poet Laureate of the Spadra Valley.”

Entering a poem for the challenge is only the beginning though. After writing their original poem, the poets must perform it before an audience of their peers and a panel of three faculty judges, all of whom vote for their favorite poems. For most contestants, this performance is the most stressful component of the competition. On the night of Project Poet, many of the poets arrive early to Munger-Wilson Chapel, pacing the flagstones of the chapel plaza or rehearsing their poem one last time. Then there is nothing to do but watch the trickle into the room until the host pulls a name from a faded tweed cap: “Next up, welcome to the mic”— and the applause roars.

The stress is real too. As the Project Poet motto goes, “In poetry, one day you’re a bestseller, and the next you’re out of print.” Each week’s challenge ratchets up the difficulty to a new level, and each week a few of the poets “go out of print.”

This season’s contestant pool has narrowed to the five poets who survived the semifinal round, or “Winter Formal,” which is arguably the most difficult round, as it requires the poets to compose in strict poet forms such as a sonnet or villanelle. The five who “stayed in print” qualified for the Project Poet Finale during Homecoming Weekend. There they will vie for the title of Poet Laureate of the Spadra Valley, as well as the $1,000 cash prize that comes with it.

Despite the high stakes involved, for most contestants Project Poet is as much about collaboration and personal expression with other poets as it is about competition.

“Every time I come into this project, it’s with the mindset that I am able to share parts of my unique human experience through a healthy platform that encourages creative thinking and honest expression. The fact that I get to participate for one week, or three, or five makes no difference,” Moore explains. “I consider myself extremely lucky to have stood beside such a unique and admirable set of poets.”

Bain seconds her opinion. “I’m honestly not a huge fan of competition,” he says, “but being able to go up against other talented poets has been an enlightening experience.”

For Bain, the moments before he steps to the mic are often ones of humility. “I usually think about how great everyone else is, and that if I lost then I deserved it because everyone else has worked hard to earn their spot.”

If the past years of Project Poet have proven nothing else, it is that no one can predict who will end up with the Poet Laureate crown, and if asked, the current poets will agree. One thing is certain though: they will be at the final round on October 19th, either to perform their own work or to support their friends. As Moore sums up, “One thing Project Poet never fails to do is surprise me. Participating or not, I wouldn’t miss it for the world.”

(Editor’s Note: The Project Poet Finale will take place in the Robson Library rotunda at 5:30 p.m. on Saturday, Oct. 19, during Homecoming Weekend and is open to all students, faculty, staff, parents and alumni. The five finalists are, Jarret Bain, Lily Marlow, Bekah Moore, Chava Roberts and Maddy Windel.)