By cnp
Posted in Presbyterian 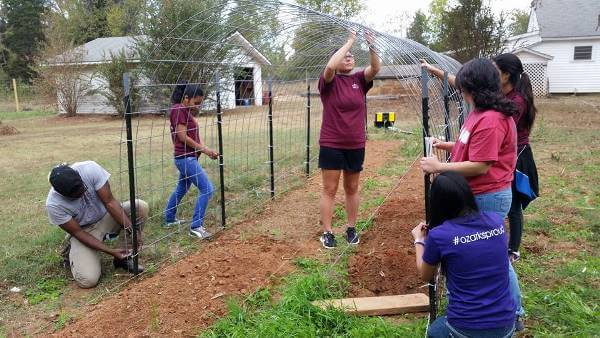 The donation of a polytunnel by the national Presbyterian Women (PCUSA) will allow the University of the Ozarks’ Food for Thought Garden to double its already impressive production, according to University officials.

The polytunnel is being donated through a competitive Thank Offering Grant of $7,000 by the national office of Presbyterian Women, located in Louisville, Ky. The polytunnel will be erected this summer and will allow garden coordinators to regulate temperature, moisture and ventilation in a portion of the garden, thus extending the growing season.

Produce from the Food for Thought garden.

According to Arkansas GardenCorps service member and 2016 Ozarks graduate Nena Evans, the garden produced nearly 600 pounds of produce during the 2016-17 academic year. She said that total could double once the new polytunnel has been in place at least a year.

“We will be able to extend our growing season into the late fall and early spring months, while school is in session,” Evans said. “That means more fresh produce for our community and for the schools, which is a great benefit.”

The Food for Thought Garden donates one-third of its produce to the local schools through their backpack programs, which provides fresh vegetables and fruit to low income families. Approximately 165 children in the Clarksville School District have benefitted from the program during this school year. Some of the produce is also donated to local food pantries.

Evans has visited the local school several times this past year to present taste-testing demonstrations and information on healthy eating. She said the most popular produce from the garden for the children have been cherry tomatoes, strawberries, snap peas, radishes, cucumbers, onions and mini peppers. She has wowed her young audiences with such concoctions as radish top pesto and snap peas in yogurt.

“We try to show them that eating healthy can be enjoyable and we try to bring vegetables that they can eat raw and as snacks,” Evans said. “I always have kids who are surprised that they like certain vegetables. When you see kids opening up their attitudes about vegetables. it makes it all worthwhile.”

Dr. Kim Van Scoy, professor of environmental studies and sustainable agriculture, said the polytunnel will also have an academic benefit to the University.

“Several classes incorporate the garden in their curriculum and the extended growing season will allow more students to get hands-on training and knowledge,” Van Scoy said. “It will be a tremendous addition to the Food for Thought Garden, to the University and to Johnson County.”

University of the Ozarks has been affiliated with the Presbyterian Church since it was established in Cane Hill, Ark., in 1834.

The University’s Food for Thought Garden produced nearly 600 pounds of fresh fruits and vegetables during the 2016-17 academic year. That number is expected to double in the coming years, thanks to a new polytunnel that will expand the growing season. The polytunnel was provided through a gift from the Presbyterian Women.