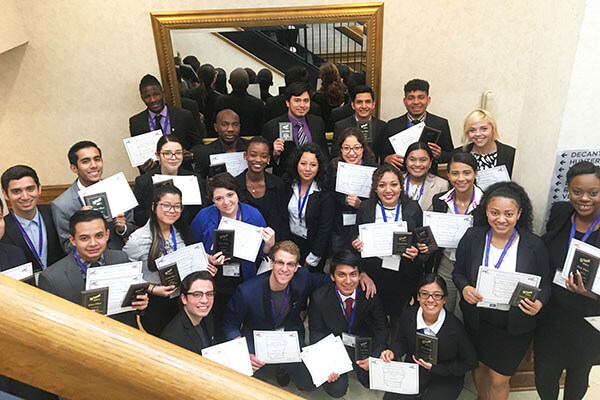 PBL members from U of O tallied three first-place awards, seven second-place finishes, two third-place awards and seven other top-five honors during the annual state-wide event that draws PBL chapters from universities and colleges throughout the state.

“These future business leaders represented University of the Ozarks well,” said Dr. Scott Sheinfeld, assistant professor of business administration and marketing and the PBL faculty advisor. “All these students worked hard applying their classroom knowledge to real-world scenarios. The proud legacy of our involvement in Phi Beta Lambda lives on in this team. Congratulations to all our competitors.”

For Ozarks, the team of Jasmine Williams, Juan Cano and Nicole Lopez won first place in the category of Business Sustainability and the team of Carlos Orosco, Yessenia Alvarez and Laura Gochez won first in Human Resources Management. The U of O team of Rodrigo Roldan and Henry Marin took first place in Global Analysis and Decision Making.

Guzman, the U of O chapter president, said she was proud of how her team competed in the state competition.

“I believe that there is no word such as quitting, but with perseverance, now that takes you further in life. That’s exactly what U of O’s PBL team portrayed over the weekend,” Guzman said. “Not only did our team bring home several top finishes in various categories, they also worked hard to prepare. I know that they will keep working hard to hone these skills and knowledge as they prepare for their future careers. I am definitely proud of them.”