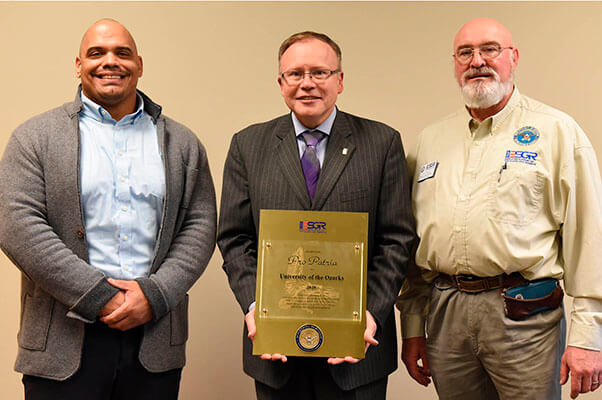 University of the Ozarks was presented on Thursday with the prestigious 2019 Pro Patria Award by the Arkansas committee of the Employer Support of the Guard and Reserves (ESGR).
Bo Wilson, ESGR’s military outreach coordinator for Northwest Arkansas, presented the award to University President Richard Dunsworth during a brief ceremony attended by faculty, staff, students and city officials on Thursday in the Mabee Administration Building.
ESGR is a Department of Defense program that was established in 1972 to promote cooperation and understanding between reserve component service members and their civilian employers and to assist in the resolution of conflicts arising from an employee’s military commitment.
The Pro Patria (Latin: For One’s Country) Award is presented by each ESGR state committee to an employer in their state or territory. Recipients have “demonstrated the greatest support to guard and reserve employees through their leadership and practices, including adopting personnel policies that make it easier for employees to participate in the National Guard and Reserve.”
“The Pro Patria Award is one of the highest awards given by the Department of Defense, so this is very special,” Wilson said. “There haven’t been very many of these given in Arkansas, so it’s very prestigious.”
During his remarks, Dunsworth recognized approximately a dozen University employees who previously served in active military or the guard and reserves.
“It’s certainly an honor and a bit humbling to be recognized for this award,” Dunsworth said. “It’s a little surprising to receive this recognition because I feel like all we’ve done as a University is to do what is right when it comes to our faculty and staff who are in the reserves or guard. It is my hope that for all employers, when somebody is willing to put their life on the line for the freedoms that we have, that we do the absolute very best we can to help and support them and their families.”
Men’s Wrestling Coach LeRoy Gardner, a Lt. Commander in the U.S. Navy Reserves, nominated Ozarks for the award.
“The University family and all they do for us is why Ozarks is very deserving of this honor,” Gardner said. “It’s not often that we get the opportunity to thank the community that supports and surrounds as we do our duty, so this is a small way to say thank you. I’m proud to be a part of the Ozarks community.”
ESGR is supported by a network of more than 3,680 volunteers in 54 committees located across all 50 states and the District of Columbia. Volunteers, hailing from small business and industry, government, education, and prior military service bring a vast wealth of experience to assist in serving employers.