By cnp
Posted in Spanish 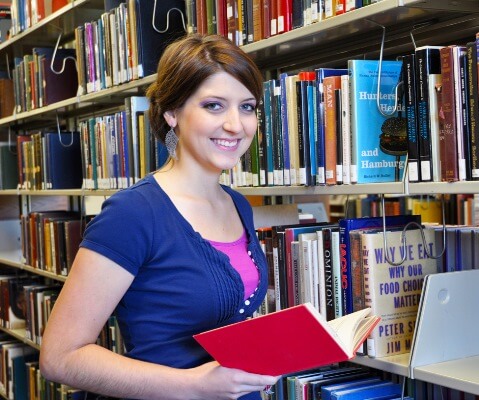 Columbia, Missouri, that is. Shayla Morrow, who graduated this spring from U of O, has been accepted into the graduate program at the University of Missouri at Columbia for the fall to begin studying for her Master’s degree in Spanish literature.

Shayla Morrow, who graduated this spring from Ozarks, will be studying at the University of Missouri at Columbia, working on her Master’s degree in Spanish literature.

“While I am extremely excited to study Spanish literature, I’m also happy to announce I’m receiving a tuition waiver and stipend from the University of Missouri as a graduate instructor of the Elementary Spanish course,” Morrow said. “My three majors – English, Spanish, and Secondary Education – have each offered a form of preparation for this next step in my life, and I am really grateful for the guidance, motivation, and dedication of all my teachers here at Ozarks. They have challenged me to always seek to reach my full potential. So here I go!”

Morrow’s interest in foreign languages began in high school. “My grandma took me on a trip to Germany, Italy, and Switzerland,” she said. “It was my first time on a plane. Then when I was a sophomore here I went to Mexico for the ‘Monarchs in Mexico’ class – it’s an interdisciplinary course that combines the Spanish language, Mexican history and culture, entomology, and ecology of Mexico. We were in Morelia in Michoacán in central Mexico, down past Mexico City. It really changed my life. And then I studied abroad in Mexico this past semester. So that’s been my traveling out of the country, and my direct exposure to other languages and cultures. It was a year ago on Sunday since I was in Mexico and I miss it terribly!”

Morrow grew up in nearby Hartman, population 596, and said a city the size of Columbia was a little intimidating. “It’s a big campus,” she said. “Really huge. I’ve gotten used to Ozarks, where everything is close together and everyone is so helpful. Not that they aren’t helpful there, but there are so many more people! It’s been a job just finding my way around and figuring out what I’m supposed to be doing! I’m planning to live off campus there. They do off-campus housing there the way we do our dorms here, and they even match roommates by interests. Anyway, it’s all going to be a big adjustment!”

At U of O, Morrow was president of the Ozarks Student Education Association, as well as a member of the Campus Activities Board and the Student Foundation Board, and a Resident Assistant. “Trying to work part-time off campus and attending classes as a full time student can be quite a challenge,” she said. “However, I was able to find several work-study jobs on campus that allowed me to work, tutor, or mentor between classes. I’ve learned how to manage my time and balance a busy schedule, which easily transitions into the grad school setting because it’s going to be equally demanding of your time.  Also, I’ve had the wonderful opportunity to make connections with students, faculty, and staff across all departments on campus, people I wouldn’t have met if I didn’t have these on-campus jobs.  Since I’ll be moving farther away from my home to graduate school, I’ve learned how a support system of friends can be found across campus, not just in your own department.”

Morrow said she is extremely grateful to her professors at U of O for the challenges they presented her with, but also “how my professors have taught me to think.  In graduate school, I know I will be prepared because I have been taught how to think about the big ideas that exist in this society.  Now, it’s up to me to act upon them and make a difference.”

In essence, Morrow said, she feels like she’s collaborated with her classmates and professors to reach the same purpose – getting a quality education. “The small class population at Ozarks encourages student engagement in classroom discussions,” she said, “which is a major factor in becoming an expert in your field.  I feel more than confident I will be ready for the challenges of grad school.”