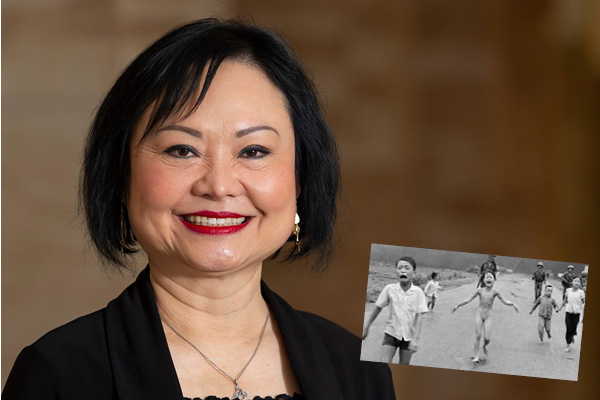 “Forgiveness made me free from hatred. I still have many scars on my body and severe pain most days, but my heart is cleansed. Napalm is very powerful, but faith, forgiveness, and love are much more powerful.” — Kim Phuc Phan Thi

Kim Phuc Phan Thi, best known as the 9-year-old child running away from a napalm attack that was captured in a famous Vietnam War photograph 50 years ago, will speak at University of the Ozarks at 7 p.m. on Tuesday, March 15, in the Rogers Conference Center.

The event, which is part of the Walton Arts & Ideas Series, is free and open to the public, but tickets must be reserved at: https://www.eventbrite.com/e/kim-phuc-phan-thi-wais-event-tickets-272137298987.

University Covid protocols, including masks and social distancing, will be in place throughout the event.

Known as the Napalm Girl, Kim was immortalized in the 1972 Pulitzer Prize-winning photograph, “The Terror of War” taken by AP photographer Huyng Cong Nick Ut. The photo shows her screaming and running naked down a road in Trang Bang, Vietnam, after having her clothing burned off by napalm.

A living symbol of the atrocity of war, she is the founder of the Kim Foundation International, a nonprofit dedicated to providing funds to support the work of international organizations that provide free medical assistance to children who are victims of war and terrorism.

Kim shares her story of unexpected survival, a life in constant pain as the tool of a communist regime, love, family, and the unshakable, life-altering faith that set her free.

It’s a moment forever captured, an iconic image that has come to define the horror and violence of the Vietnam War: Kim running in agony moments after napalm bombs fell from the sky, bringing hellish fire that burned away her clothing and seared deep into her skin. Left for dead in a hospital morgue, Kim miraculously survived — but her journey toward healing was only beginning. When the napalm bombs dropped, everything Kim knew and relied on exploded along with them: her beloved home and village, her country’s freedom, as well as her childhood innocence and happiness.

Due to constant pain, she considered suicide but in 1982 she found a New Testament in a library that led her to become a Christian. Her faith enabled her to forgive.

In 1986, Kim seized the opportunity to study in Cuba, but once again her studies were cut short due to the physical problems. While in Cuba, she fell in love with Huy Toan, another Vietnamese student who had relocated to Cuba to pursue his studies. When the couple married in 1992, they were given a trip to Moscow for their honeymoon. On their return flight, however, their plane stopped in Canada to refuel. At that time, Kim Phuc and her husband quietly left the plane and requested political “asylum.”

She became a symbol of reconciliation when in 1996 she laid a wreath at the Vietnam Veterans Memorial in memory of the U.S. soldiers who died in the war.

Today, through the Kim Foundation, she supports children who are victims of war by providing medical and psychological support in order that they overcome their traumatic experiences.  Kim was designated as UNESCO Goodwill Ambassador for culture of peace in November 1997, in recognition of her courage and generosity in promoting a culture of peace through reconciliation and tolerance. In recognition of her life dedicated to the promotion of peace, Kim received the Dresden Peace Prize 2019, which honors individuals for their work to promote peace.

She tells her story in her 2017 book, Fire Road, which has been published in 11 languages.

Kim lives in the Toronto area of Canada with her husband and two sons, Thomas and Stephen.