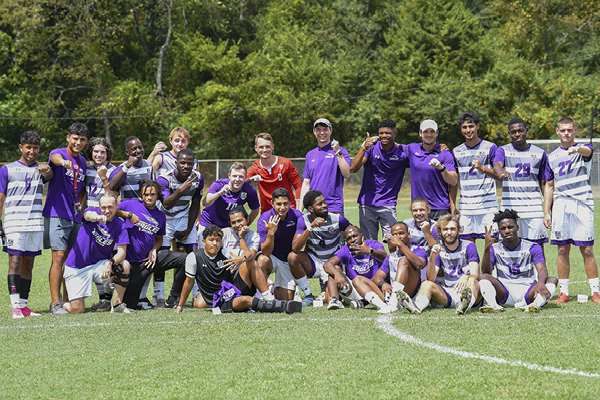 The University of the Ozarks men’s soccer team received their 2020-21 American Southwest Conference Championship rings in a special ceremony on Aug. 28 prior to the alumni match.

Designed by Baron, the ring features the University logo in the center with the words ASC Champions surrounding the logo. The players’ names are on the side.

“It was definitely a special day for the program,” said head coach Aaron Brueckner. “When they opened the box and first saw the ring, the look on their faces said it all. That is what you work for. I’ve never been prouder and I was full of joy for the guys. I expressed to the team again how thankful I was and how happy I was for them. It was their day.”

Brueckner said the alumni present were especially happy for the program.

“They were so happy and proud of the team,” he said. “This brings excitement into the alumni base. They talked about how the championship was accomplished on the road.”

The Eagles had a strong run through the ASC Championship tournament during the spring, topping Mary Hardin-Baylor on penalty kicks, defeating rival Hardin-Simmons 2-1 and then posting an impressive 3-1 win over top-seeded Concordia University Texas.