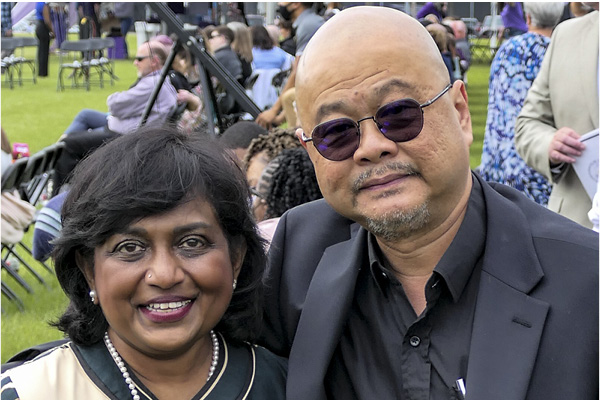 Meet Your Alumni Board Members is an ongoing series where we highlight members of the Alumni Association Board of Directors. This month we are featuring husband and wife board members George Lee ’85 and Naomi Shanti (Paranjothy) Lee ’85.  The Lees run a family business in Penang, Malaysia, with their two sons where they develop electronic greeting cards, software and apps, children’s educational titles and ecommerce. Their youngest son, Geoshan, recently graduated from Ozarks in 2020.

Tell us about your time at Ozarks. What did it mean to you? How did that time change or impact your future?

Naomi: Coming to the then-College of the Ozarks back in the 1980s from a big city in Malaysia was quite a cultural shock for George and me. It was quite an adjustment for me, especially when I had just spent a year studying in London, England, before coming over. It took me a little while getting use to the place. What helped with the transition was the close-knit campus community and the college professors who were approachable and provided students individual attention not found in bigger learning institutions in bigger cities. We often kid that although George and I grew up in the same city and attended the same church in Malaysia, we didn’t meet until we arrived in Clarksville. We took a lot of the same classes together since we had the same major, and took part in similar activities on campus. Before we knew it, we were college sweethearts. The liberal arts education at Ozarks allowed us to explore and maximize our potentials and capabilities while being creative. In addition to our majors in business administration, I minored in management and art and George minored in marketing and picked up another major in art.

George: Our participation in various campus activities such as Phi Beta Lambda, International Club, Host Family program, Art Club, Freshmen Singers/Chorale, student life activities, and college newspaper provided us opportunities and experience to learn, work and collaborate with people from across departments, divisions and groups, both horizontally and vertically. Another skill that we cultivated while in Ozarks was the ability to deliver well under time constraints while working on projects for classes or organizations. Throughout our studies in Ozarks, we produced several audio-visual presentations which led us to being hired to produce similar presentations for the Phi Beta Lambda (PBL) and Future Business Leaders of America (FBLA) state conferences while we were in college. That continued even after we graduated. These skills were something we proudly took away from our college days and have applied them in our daily lives, be it at home, work, business, or church. We have also made many lifelong friends here from the student body, faculty, staff, and people in Johnson County.  Some of whom came to our wedding in Malaysia and have visited us over the years. Over the years, some have passed on, but we are still very much in touch with their families. Ozarks will always have a special place in our hearts, and more so now with our son, Geoshan, who continued our family legacy when he graduated from Ozarks in 2020.

Why is being involved with Ozarks after graduated important to you? Why have you chosen to give back to the University?

Naomi: It is our way of giving back to the place where we obtained our degrees, developed interpersonal skills, gained experience, and where we made lifelong friends.  It is also the place where it all started as it was where George and I found each other. It is and always will be a special place for us.

George:  We love bragging about Ozarks to all who will listen to our stories.  A few kids from our church in Penang have attended and graduated from Ozarks over the past decade or so after listening to our stories.

What is your favorite Ozarks memory?

Naomi: In May 1983 I had my picture taken with the Governor of Arkansas, Bill Clinton. I didn’t quite realize the significance of the photo at that time until almost a decade later.  When he was elected president, upon the recommendation of a friend in Clarksville, we had the photo enlarged and mailed it to him together with a letter congratulating him on his victory. He was gracious enough to sign it and send it back to us in Malaysia.

George: As for me, it would be during Alumni Week in 1985 when Mrs. Helen Walton eyed one of my art pieces that was on exhibit in the cafeteria. It was my honor to gift her the Raku piece as my way of thanking her for her contribution toward the fine arts center building. She wrote me a lovely note, but unfortunately it got misplaced from all the moving around over the years.

Who was your favorite/most impactful professor at Ozarks and why?

Naomi: If I must choose one, it would have to be Dr. Randy Hilton. He knew his stuff and taught it well. He was creative, respected and understood his students, gave them the confidence and the motivation to work hard and challenged them to aim for greatness.

George: That’s a tough question. For me, there is no one favorite professor. During my four years in Ozarks, besides being able to pick the brains and learn from the professors in the business and art divisions, I had the privilege of learning from professors from other divisions as well, who were incidentally not my class instructors. Each of them had in some ways instilled a quality in me or taught me a skill that I could use or perhaps trade.  An example was learning how to operate a movie projector from Dr. Ruby Reynolds, though I never took any of her science classes, or Dr. George Schellenberger, who willingly and gracefully shared with me his knowledge on audio-visual equipment, dubbing techniques, and darkroom techniques. Those experiences indirectly led me to an opportunity to teach a course in applied photography at the college. I will always be grateful to all who invested in me back then.

Why have you chosen to continue to serve Ozarks by sitting on the Alumni board?

Both: It is our way of giving back to the place that we have benefitted from the time we were there. It shaped us in many ways and has made us who we are today.

What is your favorite Clarksville or Johnson County activity?

Naomi: Johnson County fairs, where my boyfriend would bring back lots of stuffed animals for me after winning at the carnival games.

George: Camping and photographing nature and the outdoors in Clarksville, Johnson County, and the surrounding areas. It is still a pipedream of mine to be able one day to publish a book, or a digital equivalent, on the natural beauty of Arkansas.