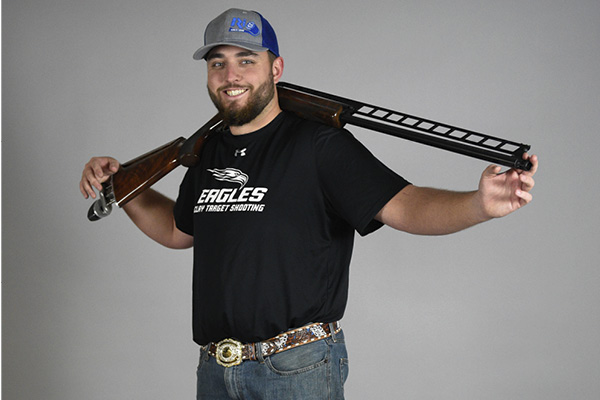 While clay target shooting is largely considered an individual sport, University of the Ozarks senior Mason Malin has come to love the team aspect of the discipline.

The environmental studies major from Paris, Ky., will wrap up a stellar collegiate career at Ozarks later this month when he and his teammates compete in the Association of College Unions International (ACUI) Collegiate Clay Target Championships in San Antonio, Texas.

Growing up in Kentucky, Malin competed in numerous shooting competitions and tournaments, thriving in the sport that celebrates individualistic results and accomplishments. Once he arrived at Ozarks, he learned that there was a whole other side to shooting sports competition.

“In all of the years I competed before college, and even during the summer between semesters, I competed as an individual, so I always wanted to go out and shoot the best scores possible to win for myself,” Malin said. “Coming  to Ozarks, I had to develop the mindset that I am not just shooting for myself, I am shooting to help out the whole team, which in the end has also helped out my individual shooting goals. I’ve really enjoyed that side of it. With the team we have here at Ozarks, anyone on the team is going to have a good day, on any given day. So for myself and the rest of the team, we all have to go out and shoot the best we can in order to help pick up anyone else who might be struggling that day. The individual titles are great in collegiate shooting, but the ones that carry more weight with them are the team titles. If I am having a day where I am not shooting exactly how I would like to be, I know that I have to keep going mentally to try and break the best scores I can in order to help out the team scores.”

“Being a part of the SCTP national championship team was an amazing feeling,” Malin said. “That has been the team goal since before I even got to the University, and to see that finally come true after several years of hard work was a great feeling.  The whole team came together and shot exactly like we all were supposed to, and in the end we had the best shoot that we have had as a team.”

Malin first got involved in shooting sports through a local shooting club in Kentucky at the age of eight and began competing less than a year later.

“The very first time I shot trap, I was hooked,” Malin said. “I have had several great coaches throughout the years, including Gary McFarland, who was my first trap coach, and Rodney Crump. My father, Ted Malin, has also been like a coach for me.  I still get the same excited feeling about seeing clay targets break that I did as a nine year old. As I kept shooting, Rodney Crump introduced me to the world of Amateur Trapshooting Association competitions, and I began to travel to various shoots in Kentucky, Ohio, Tennessee, Florida, and Illinois, as well as other states.  I knew that I would have a chance to make a name for myself someday after I won my first ATA event at the Southern Grand in Florida in 2015.  After that, I have always wanted to achieve more and more every year.”

Malin found University of the Ozarks after a fellow Kentuckian, Charles Priddy, attended Ozarks and told him about the University’s shooting program. Four years later, Malin is more than happy with his choice.

“The shooting program at Ozarks has benefitted me in more ways than I could probably say,” Malin said. “I came into college as strictly a trap shooter, and now I have become proficient in all disciplines that we shoot. I’ve really enjoyed my four years here. ”

Malin’s strength as a shooter revolves around his mental toughness, a trait he said helps him navigate grueling 100-target events.

“Shooting sports are as much mental as they are physical,” he said. “In order to perform at a winning level, you have to keep your mind focused for each one of the 100 shots within an event. Any mental lapse could mean missing a target, which could make the difference between winning or losing an event. If you’re able to perform well enough in the event to make it into a shoot-off, mental toughness can be the make-it or break-it factor. I have personally been in several shoot-offs between collegiate, and ATA shoot-offs, where I am shooting off against the best shooters in the country. To be able to stay focused enough and not let nerves get to me, I have to have a stronger mentality than whoever is shooting against me. Developing the mental toughness to compete on the highest level comes from being exposed to those levels of competition. The more you are exposed to that competitive environment, the more prepared you become and the easier it becomes to mentally prepare for the variety of situations that can happen.”

Malin’s success on the shooting range has led to numerous sponsorship opportunities, including a current trial period with RIO Ammunition, which supplies him with shells for practices and competitions.

“My deal with RIO Ammunition came about after my previous sponsorship deal fell through at the end of 2020,” Malin said. “RIO looked at my shooting resumé since 2015 and saw that I would be a good fit for their pro-staff team.  During this trial period, RIO is wanting to see a lot of social media posts with their products and me promoting their brand to the best of my abilities.  I have been more than happy with the customer service RIO provides, as well as the products they produce.  Their shot shells are some of the best in the industry and I am extremely glad to be able to represent them throughout this year.”

Malin has also thrived in the classroom, earning a spot on the University’s academic honor list for multiple semesters.

“Trying to balance shooting and academics has been extremely difficult at times,” Malin said. “I always try and set up my schedule in a way that I will have time to practice the way I want to, while also giving myself plenty of time to get homework and other assignments done.  Also, before we have to travel to shoots I have always tried to get whatever assignments are due during the shoot, done before hand so that way all I have to focus on during the weekend is shooting. “

When he graduates in May, he hopes to put his environmental studies degree to good use.

“I chose that major because I have always enjoyed being outdoors,” he said. “I also have been involved in various projects that dealt with soil erosion issues, and I really liked the idea of being able to work on various soil remediation projects.  I knew that I did not want to have a job where I sat in an office all day, and wanted a job that I would be able to work outside quite a bit of the time, so environmental studies seemed like the best option for that.”

He also plans to continue competitive shooting when he leaves Ozarks.

“I plan to continue to compete in ATA events, while also shooting in National Sporting Clays Association events,” he said. “This summer I will be traveling to ATA shoots in Ohio, Tennessee, Kentucky and the Grand American in Illinois to try and make the ATA All-American Team. During this time, I will be looking for jobs in either soil sciences, environmental remediation, or agriculture that I will hopefully be able to start working in, around late August or early September.”

But for now, Malin is focused on the ACUI National Championships in late March.

“My mindset going into the 2022 ACUI National Championships, and my last collegiate national championship, is mainly to go and enjoy it with the team,” he said. “I am practicing and preparing in order to perform to the best of my abilities this year, but for me the most important key to success in shooting is going out and having fun while I am shooting.  I have learned that the days I don’t have fun shooting are the days I don’t shoot well.  So the goal is to go enjoy the shoot and hope the scores I put up will be enough for individual titles, but more importantly, a team title this year.”