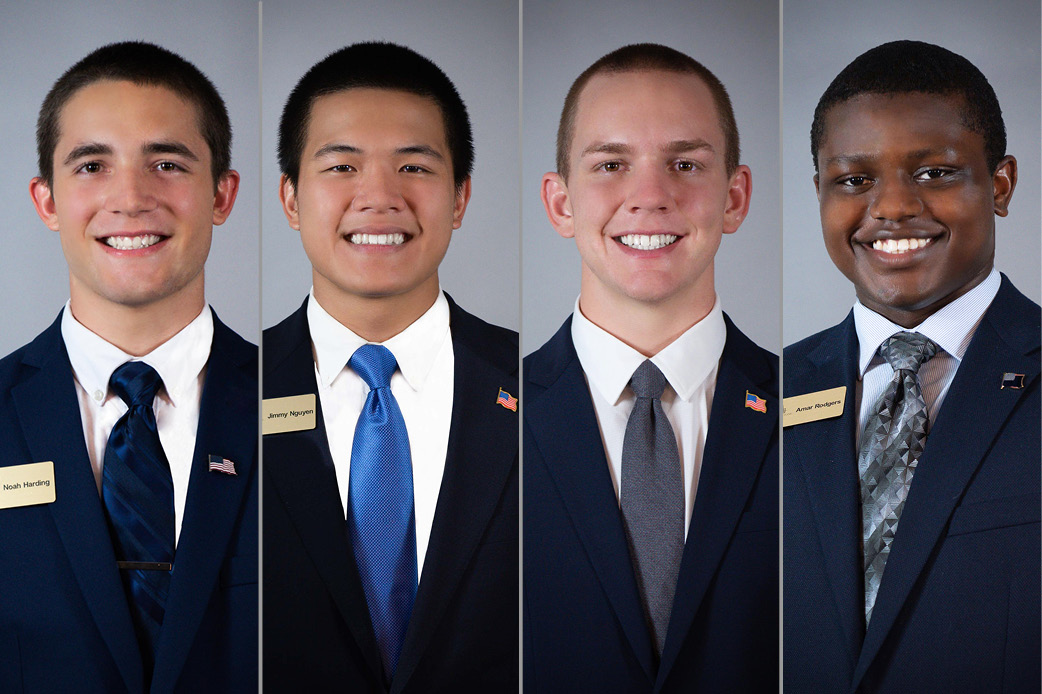 Four students from the Greystone Preparatory School at University of the Ozarks recently received the great news they have been working toward for many years.

The students learned that they had received appointments to one or more of the country’s military service academies. Those students were (pictured, from left) Noah Harding of Roanoke, Va.; Jimmy Nguyen of Garland, Texas; Troy “Trapper” Erwin of Schertz, Texas; and Amar Rodgers of Cibolo, Texas.

The students are enrolled in Greystone, a one-year, college-level academy prep school that prepares students for nomination, appointment and success at one of the country’s five military service academies. Greystone moved to the U of O campus in 2020 after spending the past 16 years in Texas.

Rodgers had the distinction of being the first Greystone student to receive an appointment, hearing from the U.S. Military Academy at West Point in late January that he had been accepted.

“I received a personal phone call from my academy liaison officer informing me of the appointment,” Rodgers said. “I was extremely happy and grateful, especially knowing I was the first appointment that the Greystone program has had here at the Ozarks.”

Rodgers credited Greystone “in bolstering my application and challenging me to grow in areas that I had not considered growing in before.”

“Greystone, coupled with the academic rigors of our course load at the Ozarks, has added seven points to my ACT and given me a college GPA that the academy has looked upon favorably,” Rodgers said. “I’ve also grown so much with leadership positions within the program.”

Erwin was accepted to the U.S. Military Academy at West Point and is waiting to hear from his first choice, the U.S. Air Force Academy in Colorado Springs.

“I was notified by West Point on February 5th that I had earned my appointment. What a day that was,” Erwin said. “I am extremely fortunate for the opportunity to attend West Point and serve our country in the Army. I am excited for the future, and my appointment is just the first step toward earning my commission as an officer in the military.”

Erwin said his time at Ozarks has allowed him to “develop academically.”

“I have succeeded in truly learning the material of my courses with the help of stellar instructors that care about each individual student,” Erwin said. “Ozarks has prepared my academically for the courses I will be taking at West Point and Greystone has given me a second chance to be a competitive candidate for the U.S. service academies. I have received training on how to succeed in the main areas encompassed in cadet life at an academy: academics, athletics and leadership.”

Nguyen learned of his appointment to the Air Force Academy in a call from his Congressman last week.

“I was overjoyed when I got the call,” Nguyen said. “Greystone has allowed me to achieve this goal by first of all taking a chance on me, and then being able to assist me and my peers through such a rigorous and stressful process. The University of the Ozarks faculty has been great to me. It’s a family-like atmosphere where they want to helped me succeed wherever I may go.”

Harding received appointments to both the U.S. Military Academy at West Point and the U.S. Naval Academy.