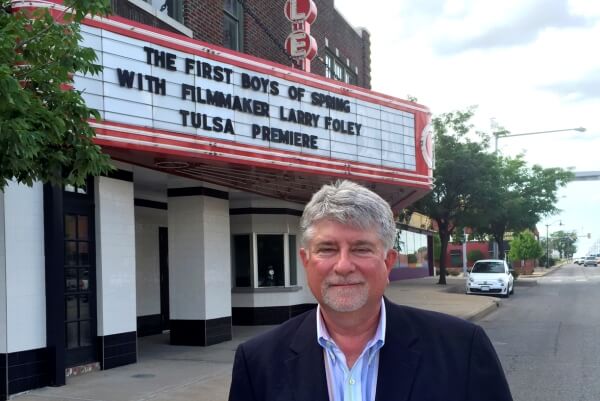 Award-winning Arkansas documentary filmmaker Larry Foley will present and discuss his film, “The First Boys of Spring,” at University of the Ozarks at 7 p.m., April 5.

The event, which will be held in the Rogers Conference Center on campus, is part of the 2016-17 Walton Arts & Ideas Series. The public is invited and there is no cost for admission.

A veteran journalist, educator and filmmaker, Foley is a professor and chair of the Lemke Department of Journalism at the University of Arkansas. His productions have earned five Emmys from the National Academy of Television Arts and Sciences, and 14 Emmy nominations in writing, journalistic enterprise, history, cultural history, special program and community service. His films have also received three Best of Festival of Media Arts awards from the international Broadcast Education Association.

Award-winning journalist, educator and documentary filmmaker Larry Foley will present and discuss his 2015 film, “The First Boys of Spring,” at U of O on Wednesday, April 5.

His 2015 film, “The First Boys of Spring,” is a one-hour documentary that chronicles an era when baseball spring training camps were held in Hot Springs, Ark.

Beginning in 1886, baseball spring training was held for the first time, not in Florida or Arizona, but in the Arkansas resort town of Hot Springs, and that’s where the annual rite caught on. For parts of eight decades, many of the best who ever played the game came to Hot Springs to shake off the rust from winters of sedentary indulgence to prepare for long seasons ahead, with such teams as the Red Sox, Dodgers, and Pirates?and the Negro League’s Monarchs, Crawfords and Grays. The film is narrated by Academy Awarding winner Billy Bob Thornton.

The film was showcased nationally on the MLB Network on February 13, 2016.  It received the “Best of Competition Award,” at the Festival of Media Arts-Broadcast Education Association in 2016.

Foley’s documentary credits also include, “After the Tsunami,” “The Art of Crystal Bridges,” “Up Among the Hills,” “Growing Hope,” “Bridge to War Eagle,” “Sacred Spaces: The Architecture of Fay Jones,” “The Greatest Coach Ever,” “Beacon of Hope: The Story of the University of Arkansas,” and “Charles Banks Wilson: Portrait of an American Artist.”

His PBS credits include, “The Buffalo Flows,” “Saving the Eagles,” “The Lost Squadron,” and “When Lightning Struck: Saga of an American Warplane.”

Foley joined the faculty at the University of Arkansas in 1993. He is founder of the campus television station, UATV, and has been inducted into the Lemke Department of Journalism Hall of Honor and the Fayetteville Schools Hall of Honor. He is past winner of the University of Arkansas faculty research award, Fulbright College Master Researcher award and Individual Artist Governor’s Award from Arkansas Arts Council.

Before coming to the U of A, Foley spent nine years at the Arkansas Educational Television where he worked his way up the ladder to the network’s number two position.  He is a former reporter, morning news anchor, assignment editor and producer for KATV Channel 7, Little Rock.