By cnp
Posted in Business Administration 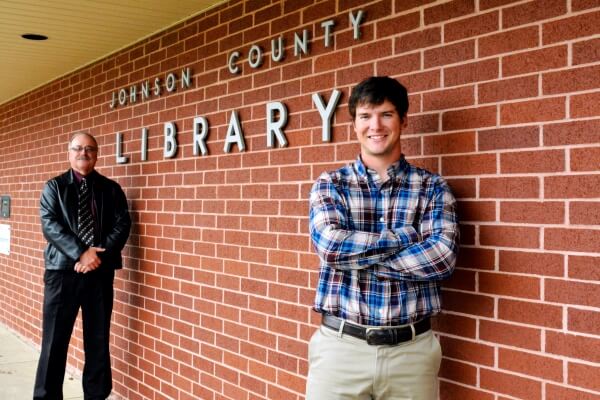 University of the Ozarks business administration major Quinten Parker is applying the knowledge and skills he’s learned in the classroom to benefit Johnson County.

The senior from Gravette, Ark., is assisting one of his professors, Associate Professor of Economics and Business Robert Wofford, on a feasibility study for the Johnson County Regional Library. The study is part of a sabbatical project that Wofford is working on for the library through the Fall 2017 Semester.

The 12-month study is looking at expansion and enhancement opportunities for the library based on new revenue that will be coming to the facility through a recent millage increase.

Parker, who will graduate in May, has been busy this semester conducting research and interviewing directors of other libraries throughout the region.

“I’m basically looking at everything from renovations and building layout to technology to staffing needs,” Parker said. “Our goal is to get as much information and feedback from other libraries as possible in order to get the best library we can for Johnson County.”

Senior business major Quinten Parker has been working with his professor, Robert Wofford, on a feasibility study for the Johnson County Regional Library.

“We want to be able to provide officials a glimpse of 10 or 15 years down the road to give them an idea of what kind of revenue the library can count on,” Wofford said. “Then they can start putting the plans in place, knowing with some certainty that they will have this amount of money in 2027 or some other future date.”

Wofford estimates that he and Parker are saving the county around $75,000 by taking on this feasibility project themselves.

I’ve been involved in several of these types of studies before and I know they can run between $50,000 and $100,000,” Wofford said. “The library asked if I would take this on and it just happened to be coming up on my sabbatical, so the timing worked out. It’s definitely a win-win situation because we can help out the county on a project and save them some money, but we also can provide great experience for our students.”

Parker, who is working on the project as part of a three-hour, senior-level practicum class, said the experience has been the perfect capstone for his Ozarks education.

“I’ve been able to use so much that I’ve learned at Ozarks on this project, not only in my business classes but many of my other classes as well,” Parker said. “It’s been great to work with Professor Wofford because he’s letting me get heavily involved in the project, but I know he’s there for guidance when I need it. My professional goal is to work for a business or organization in analytics or statistics, and this has been the ideal preparation for that.”

Wofford and Parker will make a preliminary report to the Johnson County officials later this month. Wofford will present the final report to the county quorum court and the library board in December.