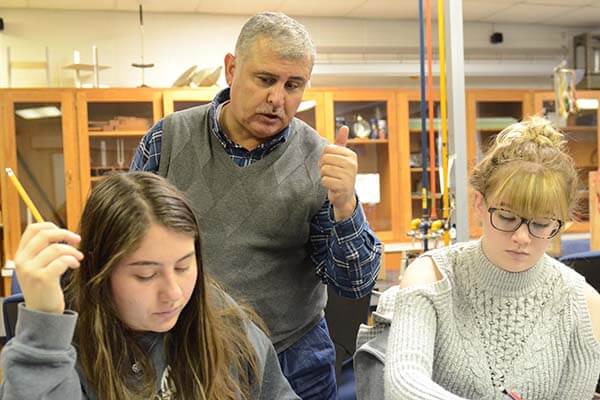 Dr. Radwan Al Faouri, visiting assistant professor of physics at University of the Ozarks, has had a paper accepted for publication in the prestigious academic journal, Scientific Reports.

Al Faouri joined the Ozarks faculty in 2018. The title of his paper is, “An Effective Electric Dipole Model for Voltage-Induced Gating Mechanism of Lysenin.”

“The paper is considered a part of a project where we are trying to design a controlled pore or channel to be used in drug delivery applications,” he said. “For such purpose liposomes, a spherical lipid holders, are used to be loaded by the drug and then released through the surface of these liposomes. In this paper, we revealed the mechanism of voltage gating of a channel, made by a protein named lysenin, where we proposed that alterations of charge distribution could influence the function of the channel. Based on the surface charge distribution of the protein, we proposed the existence of an electric dipole which interacts with external electric signals, such as action potentials in the nerve cell leading to close or open the channel. In this paper, we modified the charge on the protein by amino acid substitution and therefore the effective electric dipole strength of the protein. We have employed a novel combination of experimental and computational techniques in examining this model, where we got interesting match results.”

The paper will be published in the journal in August.

“Scientific Reports as part of Nature publications is a peer reviewed journal that publishes very good researches in natural and clinical sciences,” Al Faouri said. “To have my work published in Scientific Reports means personal appreciation of my novel science which might be cited and used by other scholars all over the world. On the other hand, it also means appreciation to University of the Ozarks as my affiliation.”