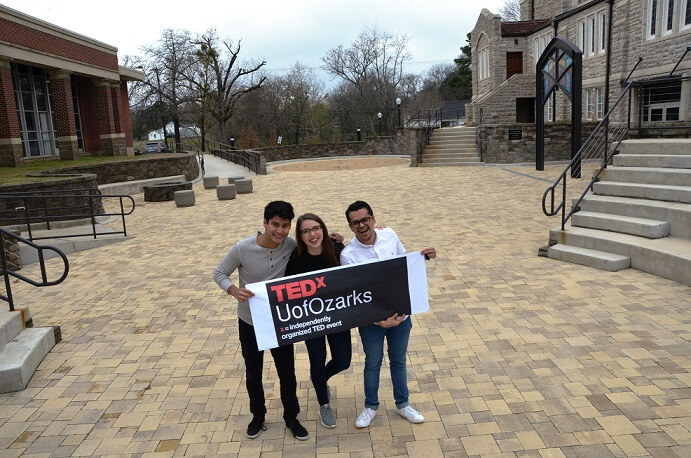 TEDx is coming to University of the Ozarks thanks to the efforts and ingenuity of three senior communication majors.

Iván Bustillo, Daniel Valenica and Chloe Welsh are organizing and presenting the event, TEDxUofOzarks, on campus as part of their senior capstone project in the communication program. The event will be held from 9 a.m. to 3 p.m. on Friday, March 31, in the Rogers Conference Center.

TED is a nonprofit devoted to spreading ideas, usually in the form of short, powerful talks that run 18 minutes or less and are then posted online. TED began in 1984 as a conference where Technology, Entertainment and Design converged, and today covers almost all topics ? from science to business to global issues ? in more than 100 languages. The independently run TEDx events help share ideas in communities around the world.

The three U of O students began planning the event almost a year ago and started the arduous process of applying for a license early last fall. TEDx has previously been held in only a handful of Arkansas communities, primarily larger cities such as Little Rock, Fayetteville and Jonesboro.

Communication students (from left) Iván Bustillo, Chloe Welsh and Daniel Valencia are bringing TEDx to campus on March 31 as part of their senior capstone project.

“All three of us love the concept of TED talks and we thought it would be a great idea to see if we could hold one here at Ozarks,” said Valencia, a marketing and communication major from La Libertad, El Salvador. “It’s typically not held in smaller cities so we wanted to help bring the first one to this area. It turned out to be a pretty complicated process to apply for the license and to get everything organized. It’s definitely been a lot of work but it’s also been something we’ve enjoyed doing.”

The theme for TEDxUofOzarks will be “A Positive Spark,” according to the organizers.

“We want the speakers to talk about their career and life passions and how they ignited that passion,” said Bustillo, a radio-television-video (RTV) major from La Libertad, El Salvador. “We want the audience members to leave the event inspired and motivated to find and pursue their own passions.”

Welsh, a strategic communication major from Fayetteville, Ark., said TEDx is an ideal event for a college campus.

“The University brings in great speakers throughout the year but we wanted to bring in a group of speakers with diverse topics and backgrounds in an intimate setting, all in one day,” Welsh said. “There’s a lot of great energy and excitement around a TEDx event and we wanted to bring that kind of atmosphere here.”

The three organizers said the collaborative efforts to bring the event to campus has been very rewarding. Bustillo has handled most of the marketing and graphic design work, Welsh has taken care of the public relations and Valencia has worked on much of the licensing and legal areas.

“We’ve learned that each of us have strengths that we can bring to the project,” Bustillo said. “It’s been exciting to work on this project together and see how our different roles are helping to make it all work. We’re using the knowledge we’ve learned in the classroom for four years and are applying it to an event that we believe can make a difference on campus.”

The event is expected to have approximately 12 speakers, each talking for less than 18 minutes. The organizers have already lined up several speakers who are regional experts and academics in areas such as sustainable agriculture, economic justice, literature and world language.

“We’re excited about the speakers we’ve got coming in and we’re still working on several others,” Valencia said. “It’s pretty amazing how this whole thing started as an idea a year ago and now it’s almost a reality.”

The event will be limited to 100 seats. The cost is $25 for general admission and $15 for U of O students, which covers lunch and a goody bag. Interested participants are encouraged to preregister online at www.TEDxUofOzarks.wordpress.com