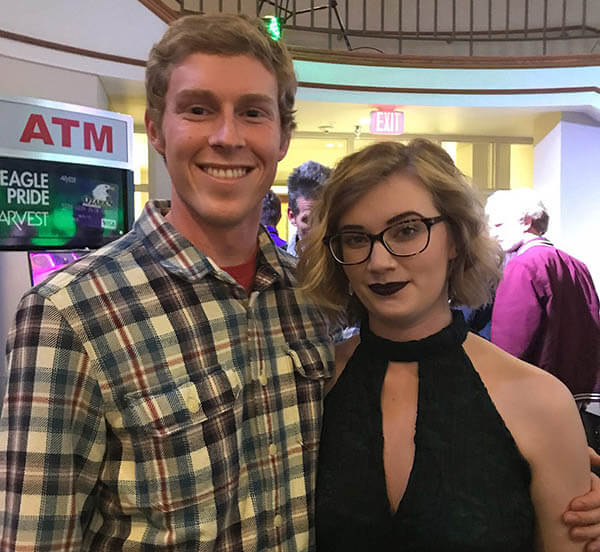 For the first time in the 11-year history of the University’s Project Poet, there are co-champions.

Sophomores Bekah Moore of Mountainburg, Ark., and Jake Sawyer of Mena, Ark., took top honors and the title of Poet Laureates of the Spadra Valley recently by winning the annual fall semester competition. A total of 20 students took part in the five-week elimination format.

In the Nov. 10 final round, the amateur poets were asked to write three poems in any style that tied in with the University’s core values of Sabbath, Honesty and Justice. Moore, a biology major, and Sawyer, an English major, each won $750 for tying for the title. Last year’s champion, Emilie Williams, finished second and won $250, Marcelina Pop won $150 for third place, and Jeremy Jacobs won the $100 fourth-place prize.

“As usual, this year’s Project Poet didn’t disappoint,” said adjunct English professor Chris Carrier, coordinator of this year’s competition. “We asked the poets to write both in free verse and traditional or formal verse. We asked them to write about their memories and the environment, about the ideas of inclusion and justice. We had poems about sex and breasts and menstruation. We had poems with colorful language, poems with poignancy, humor and sadness. We had poems that wrestled with love and death and the complexities of human endeavor. We even had video poems because a poet was away at a soccer match. It was indicative of the thought and creativity of Ozarks’ students. It was magical watching the poets write and perform poems and make the world a bit more special.”

Here are two of the final-round poems by Moore and Sawyer:

This is not a disease
If you choose to let the disease – not disease – in
You will discover that your comfort is the price you pay to be an object of desire
Never mind the fire that used to reside in your belly
Now it’s just…empty
Tickled with the four pieces of lettuce you had that day
Or the seventeen glasses of water before that
But don’t worry
The disease – not disease – will help you keep track of the number of times you hate yourself
Berate yourself
Because you didn’t really need all four did you
You gluttonous little fool
You who laughs it off when people tease that you eat like a bird
How absurd you must look
Picking and pecking like the mere thought of consuming something
Anything
Tastes too much like nourishment to the disease – not disease –
That suddenly the plate before you becomes blurred
And your paper crane fingers begin to crinkle
Like the folds of the napkin that you repeatedly smooth
In a blind attempt to discolor the truth
Yet you choose to laugh with them
Smile with them
Sometimes the disease – not disease – even encourages you to join in on the joke with them
I guess it is funny after all
Once you get past the outrageous number of trips to the bathroom stall
I mean, how small could your bladder be
But, you see
In actuality
You’ve vomited more excuses than bile
Meanwhile they’re asking you why you still haven’t had a bite
Despite the fact that you’ve been sitting there for over an hour
This isn’t the first time, though
The lies that you’ve been planting to cover the disease – not disease – have begun to grow bodies of their own
They’re taking refuge in the closet of your home
Limbs shaped like questions that you’re afraid to ask
Like “why the hell did I just google how many calories are in chewing gum”
(there’s five, if you were wondering)
When you choose to let the disease – not disease – in
You will discover that you stop asking questions
You will learn to confiscate curiosity with a steel trap snap and lock
Shove a key through the socket of any prying eyes
Because you are a gracious host
And the disease – not disease – deserves to feel welcome

There was a time
When life was a happy lot
Before the fall that brought cold
In the snow and in the rain.

In the summer,
When the road rose up to meet you
And the branches bent back from the path
And the birds sang,
You could walk all day in the dark
and go to bed rested.

When the caverns threw wide their mouths
And the stream ran sharp to the tongue,
You could sing a star-song to the dark,
and feel the music ringing in hollows underground.

When the light stayed quickly and faded slow,
You could roll in sunburnt flowers
beside leaves in fall colors
Without knowing that the fall
was coming now.
And the fruits hung ripe on the trees.

And the fruit fell
With the leaves
And the sun
And the temperature
And with the love I bore you,
You recreant earth.

Now the nights are cold with no blankets,
While the garden-benches are hard
And the flower beds have bugs in them.
The sunlight burns cold on dry lips and I
Am trying to remember green.
Because there was a time
When life was a happy lot
Before the fall that brought cold
In the snow and in the rain.