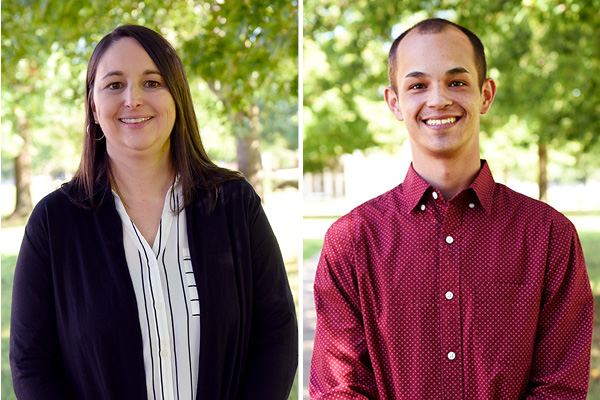 The University of the Ozarks’ Office of Enrollment and Marketing has announced two new additions to its team.

Crystal Buchanan is the new marketing coordinator as of Sept. 1, and Michael Fitzpatrick ‘21 has joined the admission team as the international admission counselor as of Sept. 7.

A native of Hector, Ark., Buchanan attended Arkansas Tech University. She most recently worked in the judge’s office of the Logan County Courthouse in Paris, Ark. She also previously worked as a sales manager for the Paris Express newspaper.

In her new position, Buchanan will coordinate marketing and printing projects for the marketing office.

She and her husband, Paul, reside in Clarksville with their children, Ethan (11) and Hannah (8). Outside of work she enjoys spending time with her family and shopping.

As a first generation college graduate, Fitzpatrick earned a degree in political science from Ozarks in 2021. While at Ozarks, he served as a student ambassador and a resident assistant. He most recently worked as a paralegal for the Sanford Law Firm.

Fitzpatrick is married to U of O alumna Chloe Welsh ‘17 and they have three children, MJ (3) and twins Callum and Colette (1). His hobbies include cooking, music and sports.