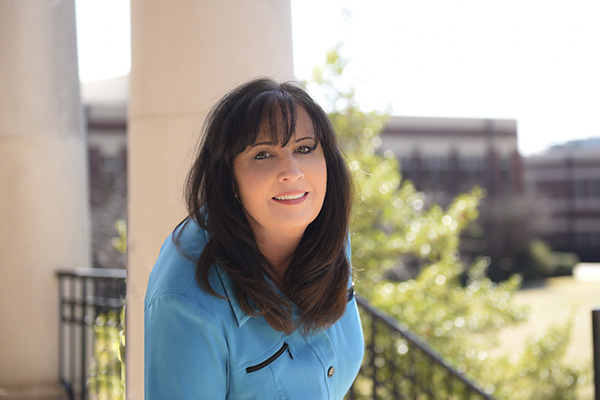 Felecia Atkinson ’03, who has worked at University of the Ozarks for most of the past 31 years, has announced her retirement, effective at the end of the Spring 2022 Semester.

Since 2015, Atkinson has worked in the Jones Learning Center as the learning disabilities educational assistant, where she has served primarily as a writing specialist and, in the last two years, taught a section of Ozarks Seminar.

She began her career at Ozarks in 1991, working part-time in the Division of Sciences and Mathematics as division secretary for Dr. Buddy Smith. Over the years she has also served as program coordinator for Academic Center for Excellence (ACE), as an adjunct in English and as the tutor coordinator in Student Support Services.

Though she enjoyed classroom teaching, Atkinson said her greatest job satisfaction came from working individually with students on research writing.

“I enjoy helping students organize their ideas and mine the databases for academic articles to underpin a project,” she said. “I also enjoy helping students understand the fundamentals of writing and grammar. Working with students as they improve their writing skills has been rewarding in immeasurable ways. Since 1991, I have enjoyed being a part of the growth and changes on campus, especially the addition of new buildings. I have been blessed to work with some wonderful people here who have become dear friends.”

“From 1996 until graduation in 2003, I took one class per semester or one or two classes during summer sessions,” Atkinson said. “Working with students with disabilities in SSS showed me what persistence looked like, so even though it would take me seven years, I was highly motivated to earn my English diploma, with my advisor Elissa’s Heil’s unwavering support.”

She left Ozarks in 2003 to pursue a master’s degree in English at Arkansas Tech University and, with graduate degree in hand, returned to U of O in 2006 to serve as an adjunct professor. In 2010, she transitioned to work full-time as program coordinator for ACE.

Atkinson said some of her favorite memories of her time at Ozarks occurred while she was both working and taking classes at Ozarks.

“I especially enjoyed my literature courses with Elissa Heil, Kendrick Prewitt, David Strain, and Tim Edwards,” she said. “My favorite memory is taking a class field trip to MacLean Hall with Professor Heil to visit a student who was supposed to be with us in our 6 to 9 p.m. British Literature class, only to find her watching Wheel of Fortune in her dorm room. The professor invited the student to turn off the television as we seated ourselves on the floor and included her in our class discussion of Middlemarch. Good times!”

Atkinson’s last day at Ozarks will be May 14. She said her retirement plans include spending more time with her parents and her grandson and travelling.