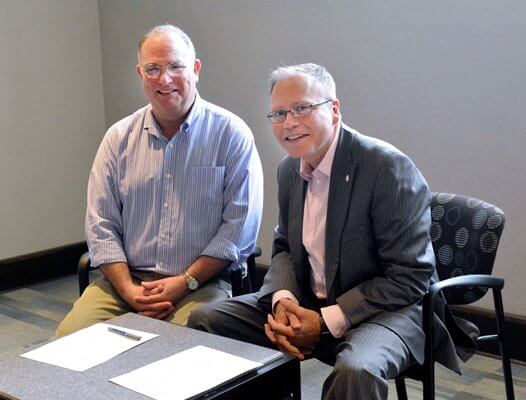 University of the Ozarks and First Presbyterian Church (U.S.A) of Clarksville have entered into a covenant that will allow the church to hold its weekly services in the University’s Munger-Wilson Memorial Chapel.

The covenant, which recognizes the long-standing partnership between the two institutions, was signed in June by University President Richard Dunsworth and Dr. Pat Farmer, Clerk of Session for the church and a U of O professor emeritus.

Farmer, who taught theatre at Ozarks from 1987 to 2011, said a declining membership prompted church members to look for alternative venues to hold its weekly services.

“As is the case with many other mainline churches who are declining in membership, First Presbyterian, Clarksville, was financially unable to maintain its 100-year-old building,” he said. “Knowing that the church is the people and not the building, the congregation unanimously voted to leave its historic home and to start a new and exciting chapter in our life as we discover what it means to be a church without property.”

Dunsworth said the agreement “is a celebration of the partnership in ministry and service that these two institutions have had for more than 150 years.”

“Moving forward, it will help us realize the potential for mutually energizing, mutually beneficial partnerships and collaboration, particularly in programmatic areas where our separate missions intersect or overlap,” Dunsworth added. “As we enter into this covenant, it’s an affirmation that both institutions will work together to enhance each other’s mission and core values.”

The agreement provides the church use of the chapel and the adjoining Wilson Plaza for its weekly 11 a.m. Sunday worship service, preceded by 10 a.m. programming for Bible study, as well as other special services throughout the year. It also sets up a Covenant Committee to “facilitate and emulate a spirit of cooperation” between the two institutions.

Munger-Wilson Chapel underwent a $2.75 million renovation in 2015 thanks to a gift from Mrs. Frances E. Wilson of Tulsa, Okla. The renovation included a new center for student spiritual development as well as a plaza that contains a 125-seat amphitheater.