By cnp
Posted in Scholarship 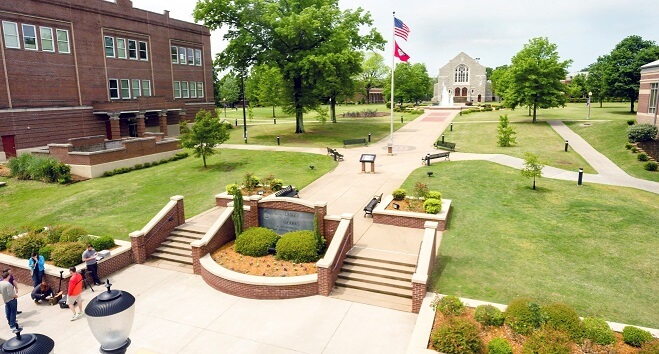 University of the Ozarks has announced a $10 million gift from the Walton Family Foundation establishing an endowed scholarship program to assist promising students from low and middle income families. President Richard L. Dunsworth announced the new Frontier Scholarship Program to the campus community in the University’s Munger-Wilson Memorial Chapel on Monday morning.

“There has been much written and discussed about the escalating costs of higher education in our country, and for many families the cost exceeds their reach,” said Dunsworth, as he shared information regarding the scholarship program.

U of O President Richard Dunsworth announced a $10 million gift from the Walton Family Foundation on Monday for the new Frontier Scholarship Program.

Dr. Judy P. Boreham, chair of the University’s board of trustees, said that the Frontier Scholarship Program would add tremendous support to the University’s strategic plan, “Renewing Our Place,” adopted by the board last fall.

“At the heart of the plan is the belief that the University, building on its legacy, should be accessible regardless of economic means,” Boreham said. “We see this gift as wholly consistent with our mission and long history of social and educational leadership.”

Dr. Dave Daily, moderator of the Faculty Senate and professor of religion, commented, “We are proud of the quality of education we provide to our students, especially at a cost that defies national trends. We’ve already eliminated hundreds of dollars in fees while not raising the cost of tuition, room and board. With this generous gift, we will be able to extend the reach of an Ozarks education even further.”

Dunsworth expressed deep appreciation to the Bentonville-based foundation established by the late Sam and Helen Walton for furthering the University’s “pioneering spirit in higher education.”  Noting that Ozarks is the oldest institution of higher education in the Arkansas-Oklahoma Territory (founded in 1834), he enumerated many “firsts” that he said demonstrated “the unflagging frontier spirit at the University.”

Helen Walton joined the University’s board of trustees in 1974, was a former chair of the board, and was named honorary lifetime chair of the board in 1985. Ozarks is a host school for the Walton International Scholars Program, and is the home of the Walton Fine Arts Center and Robson Memorial Library (named in memory of Mrs. Walton’s parents).  Other endowed scholarships and professorships have been established at Ozarks by the family.

Ozarks’ Fall 2016 enrollment is 686, up 5.4 percent, and the University will provide over $8.8 million in institutional financial aid to students this school year.  This amount does not include additional state or federal grants for which Ozarks students may qualify.

For the second consecutive year, the University has been ranked number one in the “Great Schools, Great Prices” value category among universities in the South by “U.S. News & World Report,” and was ranked third overall among 75 colleges in the publication’s South Region.

The Frontier Scholarship endowment is the latest in a string of major gifts and commitments to the University that includes funding for the complete restoration of the University’s Munger-Wilson Memorial Chapel, the $2 million McElree Faculty Enrichment Endowment, a $1 million endowed math professorship, an $800,000 endowment for study abroad scholarships, and funding to construct and support a new competition tennis complex and associated facilities.